Haughmond Abbey is a ruined, mediæval, Augustinian monastery a few miles from Shrewsbury in Shropshire. It was probably founded in the early 12th century and was closely associated with the FitzAlan family, who became Earls of Arundel, and some of their wealthier vassals and allies. It was a substantial, successful and wealthy house for most of its four centuries, although evidence of abuses appeared before its dissolution in 1539. The buildings fell into disrepair and the church was largely destroyed, although the remains of some of the domestic buildings remain impressive.

The site is now in the care of English Heritage and is open to the public during the summer. 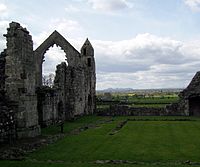 Breidden and Middletown Hills across the little cloister

Later examination of dates suggests the account is not quite accurate (William FitzAlan was a mere youth in 1138,[2] when he became involved in the Anarchy of Stephen's reign, and other discrepancies appear.

Nevertheless, it may be assumed that the foundation date lies between 1130 and 1138.[3] There may have been an earlier foundation or church here.

An early benefactor of Haughmond was Ranulf de Gernon, 4th Earl of Chester, who donated the right to fish in the River Dee and to take 6,000 salt fish free of tolls.[4] In 1155, the year after Henry II took the throne, his supporter, William FitzAlan, finally regained his Shropshire estates and William then donated the church at Wroxeter to Haughmond.[5]

The distribution of the abbey's lands shows that the abbey's assets were heavily concentrated, tending to form natural groups, in Shropshire. The abbey was keen on acquisitions and obtained grants, from kings and nobles. In addition to land and churches, the abbey increasingly exploited mills, which increased in number over the centuries. As Dissolution approached in 1538, profits from the abbey's 21 grain and 5 fulling mills amounted to about 8% of its total income.

Under King Henry VIII all monasteries and abbeys were dissolved and their lands surrendered to ther Crown. The abbot, Thomas Corveser, the prior, John Colfox, and nine canons signed a Deed of Surrender in 1539. Each of them received a generous pension: the abbot £40 a year, the prior £8, and the canons either £5 6s. 8d. or £6 each.[6] Two canons did not sign, William Rolfe who received a pension of £7, and Richard Doone, who received only 40 shillings.

In 1540 the abbey site was sold to Sir Edward Littleton of Pillaton Hall, Staffordshire. Only two years later, Littleton sold it to Sir Rowland Hill, who became Lord Mayor of London in 1547, and soon after sold Haughmond to the Barker family. During this period the Abbot's Hall and adjoining rooms were converted into a private residence, although the church and dormitory were already being plundered for building stone.[7] Some of the other buildings around the little cloister continued as private accommodation, with the Little Cloister becoming a formal garden, up until the Civil War.

There was a fire during the Civil War. Subsequently it was turned over for use as a farm.

The site was excavated in 1907[8] under the supervision of William Henry St John Hope and Harold Brakspear, who published their findings in The Archaeological Journal. A small cottage still stood in the area of the former abbots kitchen when the ruins were placed in the guardianship of the Office of Works in 1933.

Today English Heritage looks after the site and has installed a small museum.

The Haughmond Abbey buildings, like those at Lillsehall, show signs of Cistercian architectural influence. The standing remains are of white sandstone rubble construction with ashlar dressings. At the highest points, floors and lower walls were made by shaping the red sandstone that underlies the site.[9] Most of the buildings were grouped around two cloisters. They include: the foundations and west cloister doorway of the late 12th- and early 14th-century church; the late 12th-century chapter house (which is still roofed); the west wall of the warming house and dorter; the walls of the frater and its undercroft; and the early 13th century infirmary, flanked by the abbot's lodging to the east. Apart from a few walls, little else has survived from the western side of the site and, at the northern edge, the abbey church has completely disappeared – although the cruciform ground plan is still clearly visible.

The abbey site would have been enclosed by a perimeter ditch but this is no longer apparent. The precinct is still partly enclosed by a wall of undressed stone, around the south and west sides. The entrance to the abbey was about 140 yards north of the church, where the gatehouse has been traced.[9] There would have been other buildings serving the community and its guests between the gatehouse and the church but these too remain only in bare outline. The remains of the artificial landscape created in the Middle Ages are discernible further to the north. A reservoir and three possible fish ponds can be identified, along with various other mediæval features.

The main cloister was a large, almost square, open area, not arcaded like the little cloister, but open to the sky. It gave access to the main theatres of communal life: the refectory, the chapter house, the canons' dorter and the church itself.

The chapter house is of exceptional quality and in a good state of preservation. It is fronted by three heavily decorated round arches of the late 13th century, the larger centre arch a doorway and the flanking arches originally windows. The shafts between were built with carved capitals, but a series of sculptures of saints was added to them in the 14th century. The chapter house was demolished after the dissolution, apart from the western arches and south side, with another building taking its place. This was fitted with an impressive moulded, wooden ceiling, probably moved from another part of the abbey.[10] This remains in place.

The church is the most completely ruined part of the site, with little in the way of upstanding walls. A single Norman architecture arched doorway, leading from the cloister into the nave of the church shows fine foliage moulding.