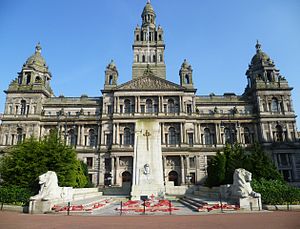 The City Chambers, from George Square 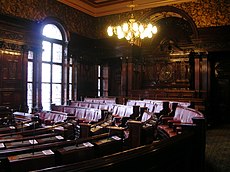 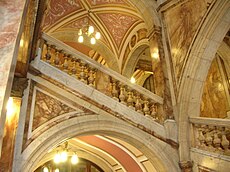 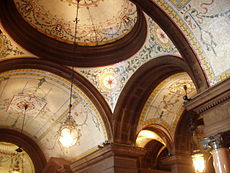 The City Chambers in Glasgow, in Lanarkshire have functioned as the headquarters of Glasgow City Council and its predecessors in the municipal government in the city since 1889. The building stands on the eastern side of the city's George Square. An eminent example of Victorian civic architecture, the building was constructed between 1882 and 1888 to a competition winning design by architect William Young, a native of Paisley.

The City Chambers were Inaugurated in August 1888 by Queen Victoria, and the first council meeting was held within the chambers in October 1889. The building originally had an area of 53,992 square feet. In 1923, an extension to the east side of the building in John Street was opened and in 1984 Exchange House in George Street was completed, increasing the size of the City Chambers complex to some 150,700 square feet.

The need for a new city chambers had been apparent since the 18th century; the old Tolbooth at Glasgow Cross had become insufficient for the purposes of civic government in a swelling town with greater political responsibilities. In 1814, the Tolbooth was sold – with the exception of the steeple, which still remains – and the council chambers moved to Jail Square in the Saltmarket, near Glasgow Green. Subsequent moves were made to Wilson Street and Ingram Street.[1] In the early 1880s, City Architect John Carrick was asked to identify a suitable site for a purpose built City Council Chambers. Carrick identified the east side of George Square, which was then bought.

The new City Chambers initially housed Glasgow Town Council from 1888 to 1895, when it was replaced by Glasgow Corporation, which after various civic reorganisations has become Glasgow City Council.

The building is in the Beaux arts style, an interpretation of Renaissance Classicism incorporating Italianate styles with a vast range of ornate decoration, used to express the wealth and industrial export-led economic prosperity of the Second City of the Empire.[2]

The exterior sculpture, by James Alexander Ewing, included the central Jubilee Pediment as its centrepiece. Although originally intended to feature a figure symbolising Glasgow 'with the Clyde at her feet sending her manufactures to all the world', the Pediment was redesigned to celebrate Queen Victoria's Golden Jubilee. It depicts Victoria enthroned, surrounded by emblematic figures of Scotland, England, Ireland and Wales, alongside the colonies of the British Empire.[3] Ewing also designed the apex sculptures of Truth, Riches, and Honour, and the statues of The Four Seasons on the Chamber's tower. The central apex figure of Truth is popularly known as Glasgow's Statue of Liberty, because of its close resemblance to the similarly posed, but very much larger, statue in New York harbour.[4]

The entrance hall of the Chambers displays a mosaic of the city's coat of arms on the floor. The arms reflect legends about Glasgow's patron saint, Saint Mungo, and include four emblems – the bird, tree, bell, and fish – as remembered in the following verse:

An abstract tapestry hanging in the hall is intended to represent Glasgow's past and present.

Pillars of marble and granite give way to staircases of Carrara marble, freestone, and alabaster, and a ceiling decorated in gold leaf is topped by a stained glass dome.

The Councillor's Corridor, containing councillors' mailboxes and decorated in Italian faience, leads to the Committee Rooms, where formal business committees meet, and an impressive library.

The corridor also leads into the Council Chamber. This is where the Council meets formally, and is one of the most impressive rooms in the City Chambers, featuring rich Spanish mahogany panelling. There are seats for each of the 79 councillors, situated in a Hemicycle, all facing the Lord Provost, his Depute, and the chief executive, who are seated behind the mace. A public gallery looks down on the proceedings, and a small press gallery is located at the side.

The Lord Provost's main office is decorated in the same Venetian style as the rest of the building. Famous visitors, including the British Royal family have signed the visitor book here.

The municipal mace is kept in an ante-room leading to the Lord Provost's office. Part of the ritual of the Council's proceedings is that the mace is carried by the Council Officer when leading the Lord Provost into the Council Chamber to chair full council meetings. The mace is made from gold-plated silver, and was presented to the council in 1912.

Adjacent to the Council Chamber, there are three rooms used for civic functions and large meetings: the Satinwood Salon, Octagonal Room, and the Mahogany Salon. These rooms are decorated in fine woods as their names imply, and also house a selection of fine paintings.

The grandest room in the Chambers is the Banqueting Hall. Its magnificence has impressed heads of state, and it has witnessed many different types of events, from formal civil ones to record launches, fashion shows, children's Christmas parties and private functions.

The hall is 110 feet long by 48 feet wide and 52 feet high. The carpet comes in three sections which are rotated regularly to prevent wear. The carpet design reflects the ornate pattern of the roof. Huge Glasgow School murals decorate the walls, depicting the granting of the city's charter, its history and culture, and the four main Scottish rivers. The hall's electric chandeliers, or "electroliers", were designed in 1885.

The daily tours of the Chambers conclude on the Upper Gallery on the third floor, which lets one see the detail on the beautiful dome visible from the other floors, as well as portraits of former Lord Provosts.

The Chambers have been used for filming on numerous occasions, not only in their own character but impersonating other places. Appearances include:[5]