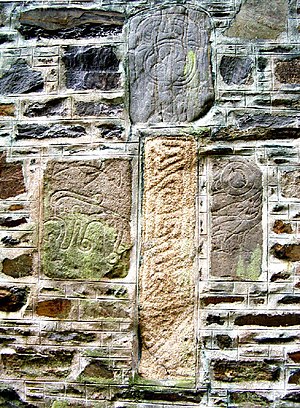 Pictish stones set into the wall of Fyvie Kirk

Fyvie is a village and parish in the Formartine area of Aberdeenshire, lying alongside the River Ythan and the A947 road. It is thought that the name Fyvie is derived from Fia-chein meaning 'Deer hill'.

Fyvie Castle is reputed to have been built by King William the Lyon in the early thirteenth century. It was the site of an open-air court held by King Robert the Bruce and home to the future King Charles I as a child.

The village's school, with around 125 pupils, serves the surrounding rural area.

St Peter's Church was built in the early nineteenth century on the site of a mediæval church. Built into the east gable are three Class I Pictish symbol stones and a Class III Pictish cross.[1]

The song The Bonnie Lass o' Fyvie tells of a captain of dragoons who dies for the love of a Fyvie girl. Additionally, the song, Andrew Lammie, tells of the doomed love of a local miller's daughter, Annie, for Lord Fyvie's trumpeter. Both of these songs may have historical basis - the young woman's grave is said to be in Fyvie churchyard.

One of the prophecies of Thomas the Rhymer relates to Fyvie, predicting it will never flourish until a particular three stones are found (a prophecy obviously pre-dating the church with its three Pictish runestones).

This Aberdeenshire article is a stub: help to improve Wikishire by building it up.