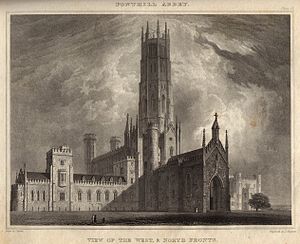 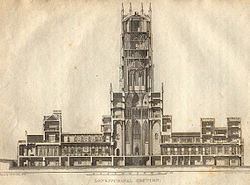 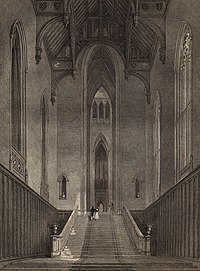 Fonthill Abbey — also known as Beckford's Folly — was a large Gothic revival country house built between 1796 and 1813 at Fonthill Gifford in Wiltshire, at the direction of William Thomas Beckford and architect James Wyatt.[1][2] Its main tower collapsed several times, lastly in 1825 damaging the western wing. The entire abbey was later almost completely demolished. It was built near the site of the Palladian house, later known as Fonthill Splendens, which had been constructed by his father, William Beckford. This, in turn, had replaced the Elizabethan house that Beckford père had purchased in 1744 and which had been destroyed by fire in 1755. The abbey has now been almost completely demolished.

Fonthill Abbey was a brainchild of William Thomas Beckford, son of wealthy English plantation owner William Beckford and a student of architect Sir William Chambers, as well as of James Wyatt, architect of the project.

In 1771, when Beckford was ten years old, he inherited one million pounds and an income which his contemporaries estimated at around £100,000 a year; a colossal amount at the time, but which biographers have found to be closer to half of that sum. Newspapers of the period described him as "the richest commoner in England".

Beckford first met William Courtenay (|Viscount Courtenay's 11-year-old son), in 1778. A spectacular Christmas party lasting for three days was held for the boy at Fonthill. During this time (c.1782), Beckford began writing Vathek, his most famous novel.[3] In 1784 Beckford was accused by Courtenay's uncle, Alexander Wedderburn Loughborough, 1st Lord (later Earl of Rosslyn) of sexual impropriety with William Courtenay.[4] The allegations of misconduct remained unproven, despite being stirred up by Lord Loughborough, but the scandal was significant enough to require his exile.

Beckford chose exile in the company of his wife, née Lady Margaret Gordon, whom he grew to love deeply, but who died in childbirth when the couple had found refuge in Switzerland. Beckford travelled extensively after this tragedy – to France, repeatedly, to Germany, Italy, Spain and Portugal (the country he favoured above all). Shunned by British society, he nevertheless decided to return to his native country; after enclosing the Fonthill estate in a six-mile long wall (high enough to prevent hunters from chasing foxes and hares on his property), this arch-romantic decided to have a Gothic cathedral built for his home. 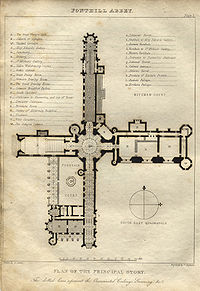 Construction of Fonthill Abbey began in earnest 1796 in Beckford's estate of Fonthill Gifford near Hindon in Wiltshire. He hired James Wyatt, one of the most popular and successful architects of the late 18th-century, to lead the works. Wyatt was often accused of spending a good deal of his time on women and drink.[5] Consequently, he also caused the ire of many of his clients — including Beckford — because of his all too common absences from client meetings, for a general disregard for supervising the construction works he was in charge of, and for not delivering the promised results in time, with clients accusing him — in certain instances — of years of delay.[5]

Although suffering from a relationship which was at time strained, Beckford and Wyatt engaged, in the construction of the Abbey. It is clear, however, that due to Wyatt's constant absences from the site, and because of the intense personal interest that Beckford had in the enterprise, he often took on the roles of construction site supervisor, general organiser, patron, as well as client. Indeed, his biographers and his correspondence indicate that, during Wyatt's prolonged absences, he took it upon himself to direct the construction of the Abbey, as well as leading the landscaping efforts in his estate.

Furthermore, the evidence suggests that not only was he happy to undertake all of those duties but, as Brockman[6] suggests, must even have lived some of his brightest moments of his adult life managing the efforts of Fonthill. This is not to say that Wyatt's role in the construction was by any means minor to Beckford's. Wyatt had not only designed the building (based on Beckford's ideas), but was ultimately a master at combining the different volumes and scales in the building. In so doing Wyatt had achieved a faux effect of layered historical development in the building by combining different stylistic architectural elements.

Glass painter Francis Eginton did much work in the building, including thirty-two figures of kings, knights, etc., and many windows, for which Beckford paid him £12,000.

Beckford's 500 labourers worked in day and night shifts. He bribed 450 more from the building of the new royal apartments at Windsor Castle by increasing an ale ration to speed things up. He also commandeered all the local wagons for transportation of building materials. To compensate, Beckford delivered free coal and blankets to the poor in cold weather.

The first part was the tower that reached about 300 feet before it collapsed. The new tower was finished six years later, again 300 feet tall. It collapsed as well. Beckford immediately started to build another one, this time with stone, and this work was finished in seven years.

The abbey part was decorated with silver, gold, red and purple. Four long wings radiated from the octagonal central room. Its front doors were 35 feet tall. It was declared finished in 1813.

Beckford lived alone in his abbey and used only one of its bedrooms for his own use. His kitchens prepared food for 12 every day, although he always dined alone and sent other meals away afterwards. Only once, in 1800, did he entertain guests when Rear Admiral Lord Nelson and Emma, Lady Hamilton, visited the abbey for Christmas.

Once he demanded that he would eat a Christmas dinner only if it would be served from the new abbey kitchens and told his workmen to hurry. The kitchens collapsed as soon as the meal was over.

Beckford lived in Fonthill Abbey until 1822 when he lost two of his Jamaican sugar plantations in a legal action. He was forced to sell it and its contents for £330,000 to John Farquhar, an arms merchant.[7]

Collapse of the building

Beckford's decidedly obsessive haste to erect the building as fast and as grandiosely as he could, coupled with the decision (ultimately pushed by Beckford), of reaching structurally unsound heights in the building's tower spire, and utilising for this a method of building called "compo-cement" by Wyatt, which consisted in using timber stuccoed with cement, led to the eventual collapse of the tower—damaging the western wing of the building too—in 1825, when Beckford had already sold the building. The rest of the abbey was later demolished. Only a gatehouse and a small remnant of the north wing (including a small tower) remain to this day.

Beckford died in 1844 in Bath in Somerset.