Elstow is a village in the very midmost of Bedfordshire. It stands inside Bedford's southern bypass, with the hamlet of Harrowden lying just to the southeast of that road. Elstow has effectively become a suburb of Bedford with the old village now almost surrounded by 20th century housing. The original village though is now a conservation area and remains intact, with some beautiful 13th - 17th century buildings and a tranquil village green is a little oasis of calm, an ideal place for a summer picnic.

The village is known for the historic Moot Hall and the 11th century Elstow Abbey church; both renowned for their beauty and historical importance.

John Bunyan was born here - at Bunyan's End, which lay approximately halfway between the hamlet of Harrowden and Elstow's High Street. 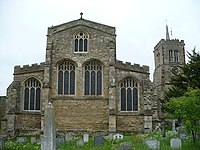 The parish church is the Church of St Mary and St Helena. It is unusual in design in that the church tower is separate from the main body of the church - a local theory for this is that the ground is soft here and the builders were concerned that it might not bear the weight of the tower, so the tower was set apart to avoid its bringing the church down were it to subside.

Countess Judith, niece of William the Conqueror founded a Benedictine nunnery in Elstow in the year 1078. The Elstow nuns came from wealthy families and each came with an endowment of money and/or lands.

Thus, in 1538 Elstow Abbey was valued as being the eighth richest nunnery in England. On 26 August 1539, the Abbess was forced to surrender the Abbey, the manor of Elstow and all the Abbey's other lands and estates throughout England to the King as part of the Dissolution of the Monasteries.[1][2]

So large and significant was the Abbey at Elstow that, even after the dissolution, the building was being considered for elevation to cathedral status, but this never transpired.

South of the village, from 1942 to 1946, was the site of the munitions factory ROF Elstow, about which the author H E Bates wrote The Tinkers of Elstow (1946). 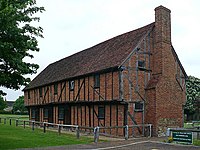 The Moot Hall (or "The Green House") is a Tudor timber-framed building which stands in isolation on Elstow village green. This was built in the 15th century, possibly by the Abbey's carpenter William Arnold, to provide both a court room and a market house.

During the 1950 renovations, the original Mediæval form of both floors was restored and the window in the western wall moved back down, but the external walls’ brick in-fill was retained. The timbers of the Mediæval roof were also left intact, with new rafters being laid over the originals.

Similar late-mediæval market houses, with a long chamber on the upper floor, are rare. Two others survive in Buckinghamshire, at Long Crendon and West Wycombe and a similar, but later, example is to be found in Leighton Buzzard, Bedfordshire. However, Moot Hall is thought be unique, being the only known example of a market house, built by a nunnery, combining a courtroom and shopping centre.

For many years, it was thought that the downstairs shop bays were only used for storing stalls and other equipment in connection with the Abbey's bi-annual fairs. However, investigations carried out in the 1990s into the building's method of construction, indicated that the six shop bays were probably permanent shops, used throughout the whole year.

The Abbesses of Elstow held the title of Lord of the manor and acted as local magistrates, hence their need for the courtroom which, in the case of Moot Hall, was located in the main upper room. As well as being used as a manorial court, it would have been used as a Court of Piepowder for the settling of disputes arising during the Abbey's (and, after 1539, Elstow village's) large, four-day, May fairs.

This upper room was probably also used through most of its history as a village meeting place, hence its present name. Some early records refer to it as "The Green House". Whether it was also known in early times as "Moot Hall" is not known - the earliest known recorded instance of it being referred to as such is in Reverend John Brown's biography of John Bunyan, in which he refers to it as 'what we may call Moot Hall'.

In 1616, Radcliffe's son Edward sold the Elstow estate to Sir Thomas Hillersden, who left £100 in his will so that his wife could convert part of the cloister building into a grand manor house, which was subsequently named “Elstow Place”, a magnificent building, its porch possibly designed by Iago Jones, would have been seen every time the young John Bunyan walked into Elstow village and may have been the original inspiration for his 'House Beautiful' in "The Pilgrim's Progress".

By 1773, the Hillersden family consisted of just two sisters who, with their finances dwindling, let Moot Hall, its equipment and fair tolls to Thomas Coleman. During the 1790s, the Hillersden sisters moved out of “Elstow Place” into the smaller "Elstow Lodge", leaving the mansion to fall into ruin, and then gradually they sold, piece by piece, the rest of their Elstow estate to Samuel Whitbread.

The 1800 Enclosure Act allotted Elstow Green to Whitbread and, with it, the ancient right to hold fairs and exact tolls and rents on stallholders. Whitbread subsequently purchased further properties in Elstow, until he owned most of the village. (Hence, the present-day numbers which appear on some houses in Elstow’s High Street, Wilstead Road and West End are Whitbread (Southill) Estate, not street, numbers.)

In 1812, the Whitbread Estate leased Moot Hall to the Elstow Congregation of the Bunyan Meeting Free Church and, for most of the rest of the 19th century, Moot Hall was used as a National and a Night school, with the Bunyan congregation holding Sunday evening services of worship in the former courtroom.[3] They regularly attracted larger congregations than the nearby Abbey Church.

Schooling for children continued in Moot Hall until 1873 when, anticipating the Elementary Education Act 1880, a purpose-built, school was constructed at the northern end of Elstow High Street. The Bunyan congregation continued to hold their services in Moot Hall until 1910, when they too moved to the High Street, into a newly constructed chapel, next to the new school.

May Festivals have, however, continued to be held on Elstow green. The stump of the original Mediæval Market Cross - which denoted the Elstow Abbey Fair's Royal Charter status - still standson Elstow green, some 50 yards west of Moot Hall.

In 1950, Major Simon Whitbread gave Moot Hall and Elstow green to the council which restored the building to its original mediæval form, as their contribution to the Festival of Britain. A year later, Moot Hall opened as a permanent museum. It is now owned and cared for by the borough, which continues to operate it as a museum illustrating 17th century Bedfordshire life, with exhibitions of antique furniture and information relating to John Bunyan.[4] It is also used for art exhibitions, concerts, private and public meetings and is available to hire for private functions.

No-one knows for how long Elstow has held May Day festivals but there were certainly ‘fairs’ held here, at the beginning of May during the days of the Elstow Abbey (1078-1539)which held a charter to hold markets here. The Abbey’s fairs were large, commercial affairs, covering all the fields around the Abbey and would have attracted many traders and shoppers from all the surrounding counties. Whether there was maypole dancing during the days of the Abbey is unknown. Notwithstanding the strength of puritanism in Bedfordshire, when the government banned Maypoles in 1652 as a pagan remnant, Elstow was one of the places which chose to ignore the ban.

In about 1889, Elstow May Day [5] celebrations appear to have lapsed for some thirty years - until 1925, when the headmaster of Elstow School, Mr R.A.J.('Bob') Wadsworth re-established the festival. In that year, the event attracted a crowd of over 1,000 people. The chief organizer of the dancing was Miss Dorothy Pestell, the school’s music teacher and, so popular were the dances, that the school was often invited to take their pupils to perform at other locations.

The fame of Elstow’s May Festival spread rapidly, attracting considerable interest from local newspapers and photographers. In 1932, it was reported that ‘crowds of people came from all parts of the county’. In 1935, all ten of the former May queens were present at the opening ceremony.

Elstow May Festival continued even through the years of Second World War and, in 1945, celebrated its ‘coming of age’ in the presence of its ‘first’ (i.e. from 1925) May queen, Laura Caves. In 1948, headmaster Bob Wadsworth retired but the festival continued and by 1952 was attracting a combined audience (across the two performances) of ten to twelve thousand people. Moot Hall's museum holds a substantial collection of photographs - from the 1920s onward - and these can be viewed on request.

The reorganisation of the sponsoring school closed the festival, until in 1974, the festival was re-introduced by Elstow Lower School, albeit on a much smaller scale and with only young children, aged up to 9, using a much smaller May pole on the school’s playing field, rather than on the green. The school managed to run this festival until 2000, when curriculum pressures forced them to stop.

The Festival was revived in 2006 by the Reverend Jeremy Crocker, rector of Elstow Abbey. Rather than burden the school with having to organize everything, various people from the church and village became involved. The present day May festival is different to Bob Wadsworth’s production, in that there is a funfair, a fete and performances by various guest musical, cheerleading and dancing groups. It is, in fact, now much closer in its character to those May Fairs which provided the inspiration for John Bunyan’s ‘Vanity Fayre’ in “The Pilgrim’s Progress”. The festival still includes the old coach conveying the May Queen in procession from the former school buildings, down High Street to Elstow green. Children from Elstow Lower school carry out a few Maypole dances but, sadly, there are far fewer children involved than in the 20th century and there are no Jesters, Heralds, ‘doves’ or decorated boughs. However, this event still provides an opportunity, as it has done - possibly for millennia - for the people of Elstow to come together, celebrate spring and to have fun. 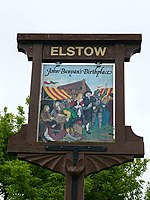