From Wikishire
(Redirected from Dysart, Fife)
Jump to: navigation, search

Dysart is a tiny town and royal burgh on the southern coast of Fife between Kirkcaldy and West Wemyss. The town is now considered to be a suburb of Kirkcaldy. Dysart was once part of a wider estate owned by the St Clair or Sinclair family. They were responsible for gaining burgh of barony status for the town towards the end of the 15th century.

The first record of the town was made in the early 13th century, with the initial role to settle civil matters between the church and landowners. During the middle of the 15th century, trade with the Low Countries began for salt and coal exportation. In the 16th and 17th centuries, trade expanded to the Baltic Countries. Dysart acquired two nicknames: "Salt Burgh" and "Little Holland" as a result.

Following the sudden decline of the town's harbour caused by the closure of the Lady Blanche Pit, the town was amalgamated into the royal burgh of Kirkcaldy under an Act of Parliament in 1930. The site of an urban clearance taking place during the 1950s and 1960s, saw large parts of the historic town being demolished for new housing. Demand from the town's residents meant that part of the historic town — most notably the 16th-century and the 18th-century houses of Pan Ha' opposite the harbour — were salvaged and preserved for future generations. Today, Dysart retains an individual character within the boundary borders of neighbouring Kirkcaldy.

The local saying "as old as the three trees of Dysart" suggests that the town's existence stretches back to ancient times.[1] Dysart's name is considered to have had two meanings. It may be from the Latin word "deserta" meaning "desert" – a word used in the Celtic church of those places to which monks retreat – and this would be in reference to the legend of St Serf who came to Dysart around 500 AD. Another suggesting is that it is from the Old British tongue, and "dys-ard" means height of a god.[2][3][4]

According to the statistical accounts of the parish ministers of 1793 and 1836, the name is alleged to come from Gaelic word "Dus-ard" which means "the temple of the most high". Nonetheless, Dysart's most famous son, Dr John Stuart explains where he thinks about the origin of the name and why.[5]

"We learn from an early life of St Serf that he won't resort to cell or caves for the purpose of devotion, and that while in one of the latter "in deserto' he was assaulted by the devil, who wished to engage him in a religious disruption"

Before the 16th century, very little is known about the events of the town.[6] The earliest record of the town's existence is a document about a papal decision between Dysart Kirk and Dunfermline Abbey in 1220.[6][7] Another record followed in 1245, this time about the reconsecration of Dysart Kirk undertaken by David de Bernham of St Andrews.[2] The initial role of the town was to serve the church and landowners resolving civic matters and dealing individually with property issues.[8][9]

The first port has been said to date as far back as 1450. This helped the export of coal and salt with the town's trading partner, Low Countries. A man-made harbour was eventually built, but could only be used at low tide with limited space.[10] The damage caused by the jetty which was commonly known as the "east haven of Dysart" temporary cut short the function of the east pier in the mid-17th century.[10] The harbour was later extensively re-built in 1829-31 with the assistance of Robert Stephenson, to include an inner basin with a nearby quarry at the harbour head and an extension of the east pier which would be risen and pointed southwards.[4][11]

During the 16th and 17th centuries, the town went through hard times with many residents particularly skippers being killed in the Wars of the Covenant (1644–1645). Oliver Cromwell's men occupied the town for 5 years, between 1651 and 1656. The salt trade gained the town with two trading partners – Netherlands and the Baltic countries with production thriving between 1570 and 1630.[2] Subsequently, the town was gifted with two nicknames: salt burgh (for the salt industry keeping the fish fresh for export) and later Little Holland (for the Dutch influence in Dysart's buildings inspired by the shipowners who went there).[1][2][12] The first coal pit in the town - known as Lady Blanche - opened towards the end of the 16th century. Two new pits – Frances and Randolph – would later follow by the middle of the 17th century as coal began to succeed the salt trade.[2][13] Meanwhile, the harbour was revived and the imports of wine and spirits were sent to other harbours at Leith, Dundee and Perth.

By the 1920s, the owners of the harbour, Earl of Rossyln's Coal Company, put pressure on the town council to deepen the harbour for use of larger ships.[14] The council was plunged into financial ruin after the coal company refused to pay for the work in excess of £500. Many ships went instead to Buckhaven and Methil, where they received a quicker turnaround than in Dysart.[15] The closure of the uneconomic Lady Blanche Pit in 1929, proved to be the end of the town's coal trade from the harbour.[2][14][15] The lack of revenue from Dysart's harbour, forced the town to merge into Kirkcaldy under a private act of parliament in 1930.[14]

Today, Dysart is considered to be a north-eastern suburb of Kirkcaldy and the village forms one of 48 conservation areas in Fife. Important landmarks in the village include the Dutch influenced houses on Pan Ha'; the six-storey St Serf's Church Tower; Dysart Tolbooth and the Francis Collery gearhead which is situated on the northern boundaries. An £11 million pound scheme has started by The Townscape Heritage Initiative (THI) and Conversation Area Grants Scheme (CARS) to regenerate Dysart over a period of five years, which is due to be completed in 2014. This will include repairing historic buildings and structures such as Dysart Tolbooth and Dysart Harbour as well as providing new housing needs and environmental issues.[16]

The Sinclair or St Clair family have held the position of feudal superiors or barons of the burgh of the estate of Dysart since 1407.[2][4] They were responsible for gaining Burgh of barony status towards the end of the 15th century.[1][4]

Royal burgh status in the town has long been disputed.[4] A main reason for this being the area was a commercial background.[2] A missing charter was only confirmed in a charter granted by King James VI in 1587. However the title was indeed granted to Dysart in 1594 with the honour of having a seat in the parliament.[2][3]

Originally, St Serf's Church was the meeting place of the town council, until this moved to Dysart Town House in 1877. The provost and town council met at this location once a week right up to the time of the ceasing of the royal burgh status, when the town was amalgamated into Kirkcaldy in 1930.[17] The town's former coat of arms were represented by an oak tree. This stood for the memory of the three trees planted in Dysart wood for the three Sinclair brothers. According to the tale, one night in the woods, the brothers were robbed and then killed each other. The site of Dysart Wood is most probably Ravenscraig Park.[18] 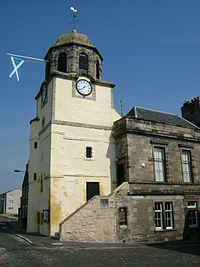 The whole of Dysart is a conservation area, so designated by the council in 1978.

Dysart Tolbooth on the High Street erected in 1576 is the centrepiece of Dysart's historic buildings. This was once used as a public weigh-in and measures house; guards house and eventually a prison built as an extension in 1617.[17][19][20] The building was also known to keep explosives. When this was occupied by Oliver Cromwell's troops in 1651, one of them accidentally dropped a match into a barrel of gunpowder (which was abandoned by a Dysart merchant) causing the roof to be blown apart.[21][22] The upper part of the building was later re-built between 1733 and 1734 with an ashlar bell-chamber and a stone ogile roof.[19][23] The neighbouring Dysart Town Hall was once used as the meeting place for the provost and town council.[22] 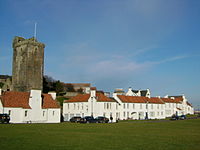 Other significant landmarks within the town include the 16th and 18th century painted dwellings on Pan Ha'; the six-storey St Serf's church tower and the harbour. Pan Ha' or given the full title Pan Haugh means roughly low-lying ground where salt pans once stood giving rise to the expression of "to carry saut to Dysart".[24] Many of the houses have been restored by the National Trust between 1968 and 1969 under the "little houses scheme".[19][25] During the restoration of the former Bay Horse Inn at Pan Ha', once the residence of a son of Lord Sinclair, two renaissance painted ceilings were discovered and are still retained by Historic Scotland.[26] St Serf's church tower on Shore Road dates from around 1500, is considered to be one of Scotland's finest examples of a battlemented church tower.[27] This is the only remaining part of St Serf's Church which was abandoned in 1802 and largely cleared away for the building of Shore Road in 1807.[14][27]

The red headgear of the Francis Colliery is a landmark marking the northern boundaries of the town.[14][24][27]

Dysart House which was formerly the seat of the Earl of Rossyln overlooks the harbour. The earliest section of the house is the south range built for General James St Clair between 1755 and 1756, which is believed that the Adam Brothers provided the chimney pieces and the design. The house was later extended between 1808 and 1814 to include new rear wings.[28] The three-storey harbourmaster's house which is located in the grounds of the harbour dates from around 1840.[29] Originally known as the shore house, this was used to store cargoe from incoming ships, before being used by the harbourmaster.[29] Today, the house is home to the headquarters of the Fife Countryside and Coast Trust and also has a bistro, shop and provides internet access.