Durrow is a small town located in a detached part of County Kilkenny locally situate in County Laois. Bypassed by the M8 motorway on 28 May 2010, the town is located on the R639 road at its junction with the N77. The river Erkina flows through Durrow and joins the River Nore about a mile east of the town. The town takes its name from the Irish (Darmhagh Ua nDuach - the oak plain [in the territory] of Ui Duach). The year 2008 was a celebration of 300 years of Durrow. Many local events were organised to celebrate the culture and heritage of Durrow.

The earliest recorded church in the village was in 1155. Evidence from the Archaeological Survey carried out by the Office of Public Works in 1995 suggests that this area has been visited, if not inhabited, since as early as the Bronze Age. An urn-burial found on the lands of Moyne Estate dates roughly to the same period as those found at lronmills and Ballymartin (900–1400 BC). Fulachta Fiadh (early cooking sites) have been identified at Aharney and near Ballacolla. The numerous ring forts and other enclosures that dot the landscape point to a more permanent, if dispersed, settlement of the land by the Celts (500 BC–AD 500). At some point in pre-history, the land was part of the kingdom of Ossory, and remained so as part of Upper Ossory into the seventeenth century.

There are numerous religious settlements in the area that date back to the 6th century. While the monastery founded by St Fintan on the banks of the Erkina is perhaps the best renowned, documented evidence exists for other such establishments at Dunmore, Clonageera, Dereen, the Course wood, Tinweir, Ballinaslee, Tubberboe and Newtown.

The coming of the Normans in the 12th century sounded the death knell for many of these Early Christian settlements and the lands were subsumed (despite heated objections from the Earls Marshall, who wanted it for themselves) into the Manor of Durrow, an Episcopal Manor for the Bishops of Ossory. Indeed, it was this development that sowed the seeds for the establishment of the town of Durrow as we now know it. In 1245, Geoffrey de Turville, the Bishop of Ossory from 1244 to 1250, was granted permission from the King to hold a yearly fair at this manor for six days beginning on St Swithin’s Day and a weekly market on a Thursday.

After the Reformation, the manor passed into the ownership of the Earl of Ormond. In 1600, when Upper Ossory was made part of Queen's County, Ormond ensured that Durrow remained an enclave of County Kilkenny where he was based.[1] [2] Ormond released the manor on 19 February 1708 to “William Flower and his heirs, forever”. It was under the patronage of Flower and his descendants, the Lords Ashbrook, that the present town developed and prospered.

A weather station broadcasts from Durrow providing real time data. The station monitors temperature, rain, wind, wind direction, humidity and atmospheric pressure. Also, a Met Éireann climate station was installed in 2010 and the observations are sent to Dublin on a monthly basis. The climatological station measures rainfall in a manual gauge, soil temperatures at depths of 5cm, 10cm and 20cm, air temperatures including wet-bulb, daily max, daily min and grass minimum temperatures. The station is envisaged to last thirty years and establish a climate profile for Durrow.

The weather of the town can be described as temperate with rare extremes when compared to other locations around the world. However, when looking at the observations and comparing it to other locations around Ireland it is notable that Durrow is amongst the warmest locations in the country during the summer, and the coldest in winter. Owing to the proximity of the “sunny south-east” the town receives lower rainfall than the national average. 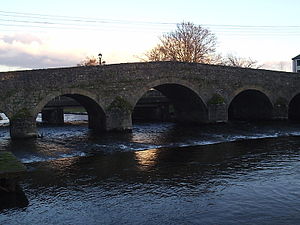 The old bridge over river Erkina. In the outskirts of Durrow.

One of the most famous residents of Durrow has been William Carrigan.

There are two daily coach journeys each way to/from Portlaoise via Abbeyleix and one daily journey to/from Johnstown, County Kilkenny via Cullohill. There is no Sunday service. Slieve Bloom Coaches operate a route from Borris in Ossory to Portlaoise which serves the town [3] Bus Eireann's Expressway service between Dublin and Cork ceased to serve Durrow on 30th June 2012. As an interim measure until 18th November 2012 Bus Éireann operated a shuttle service to connect with Expressway services at Portlaoise.[4]

There are numerous beautiful walks around the Durrow area. There are also cycle paths. These include the Leafy Loop which runs by the River Nore. There is also rich woodland in the vicinity of Durrow, such as Bishops Wood, which extends on both sides of the R693 (Dublin - Cork Road). Here you will find the local river Erkina which is a tributary of the River Nore.