Drem is a small village in East Lothian. It is approximately 20 miles east of Edinburgh and is close to Haddington (to the south), North Berwick (northeast), Dirleton (north) and Gullane (northwest).

It has a railway station on the Edinburgh to North Berwick line with hourly service between those points and occasional service to Glasgow.

The disused airfield buildings were used to construct component parts of the Forth Road Bridge. 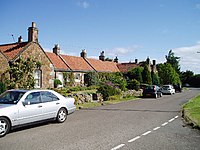 During Second World War the former West Fenton Aerodrome (later Gullane Aerodrome) became RAF Drem and the Drem Lighting System was developed to assist Spitfire landing. Today some of the outbuildings have become part of the Fenton Barns retail and leisure village and are used as studios by local craftspeople, particularly furniture makers.

Chesters Hill Fort, 1 mile south of the village is an example of an Iron Age fort.