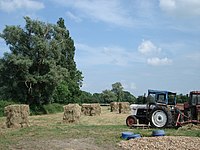 The former church at Caldecote

Denton and Caldecote is a joint parish in Huntingdonshire which unites two small villages of the county on the edge of the fens:

The two villages are little more than half a mile apart, Caldecote no more than a scatter of cottages on the local road out from Stilton and Denton a little bigger on the road reaching southeast towards the A1.

Denton was the birthplace of the noted scholar Sir Robert Cotton but the building has now gone and the 17th Century village church is also a ruin.

At Caldecote is a largely restored 13th Century church, now converted to a private residence.

To the north of Caldecote is the site one of the vanished villages of Huntingdonshire, named Washingley. Hall Farm still stands at Washingley and by it the earthworks from a motte and bailey castle. The woods around the site of Washingley mark out a square pattern bearing witness to what stood there.

This Huntingdonshire article is a stub: help to improve Wikishire by building it up.
Retrieved from "https://wikishire.co.uk/w/index.php?title=Denton_and_Caldecote&oldid=7682"
Categories: