Denny Abbey is a former abbey near Waterbeach, six miles north of Cambridge in Cambridgeshire. It is now the 'Farmland Museum and Denny Abbey', and in the care of English Heritage.

The monastery was inhabited by a succession of three different religious orders. The church and refectory buildings remain, and are listed buildings[1][2] and the whole site is a scheduled ancient monument.[3]

The site, on an ancient road between Cambridge and Ely, was settled by farmers as early as the Roman period. The Domesday Book recorded that it was owned by Edith the Fair (also known as Swanneck), the consort of King Harold, in 1066. It was owned subsequently by the Breton lord, Alan, 1st Earl of Richmond.[4] 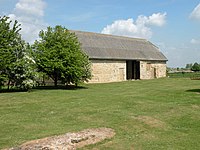 The place-name 'Denny' is first attested in Templar records of 1176, where it appears as Daneya and Deneia. The name is thought to mean 'Danes' Island '.[5]

A group of Benedictine monks, dependent upon Ely Abbey, moved here from their water-logged monastery at Elmeney (a vanished settlement about a mile to the northeast) in the 1150s, at the suggestion of Duke Conan IV of Brittany. They built a church and monastery, called Denny Priory, which opened in 1159. The crossing and transepts are the only parts of the original abbey that remain today. In 1169 the monks returned to Ely and the site was transferred to the Knights Templar.

Preceptory of the Knights Templars

The Templars built a number of additions, including a large Norman-style arched doorway and a Refectory. Denny became a hospital for sick members of the Order in the mid-13th century.[6] By the end of that century, the Knights had lost their power, and in 1308 King Edward II had all the members of the Order arrested and imprisoned for alleged heresy, confiscating their property. Denny was then given to the Knights Hospitallers, who took no active interest in the property. In 1324 it was taken back by the Crown. 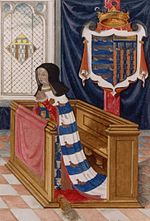 In 1327, King Edward III gave the Priory to a young widow, Marie de Châtillon, Countess of Pembroke (1303-1377), known for her founding of Pembroke College, Cambridge. Countess Marie turned what had been the Abbey church into her lodgings. She built a new church and gave the remainder of the priory to the Franciscan Poor Clares. This community of nuns moved from their flood-prone Waterbeach Abbey. The priory was expanded during this period, with comfortable quarters for the Countess, who never entered the Poor Clares, and spartan accommodations for the nuns. The priory began to be called Denny Abbey during this period, despite the fact that the term "abbey" is never used by the nuns of that Order.

The Countess of Pembroke died in 1377 and was buried before the high altar of the nuns' church in Denny Abbey, but the precise location of her grave is now lost. 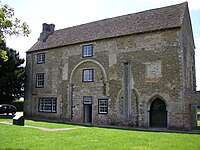 The abbey was closed in 1536, during the Dissolution of the Monasteries, and was once more taken over by the Crown. The last of the nuns had left within two years. The Abbess's lodge, originally built for the Countess, was retained as a farmhouse, and the Refectory as a barn, but the nave was demolished. In 1628 the abbey passed into private ownership. The barrister John George Witt was born at Denny Abbey in 1836. Pembroke College, Cambridge, which had also been founded by the Countess of Pembroke in 1347, bought the site in 1928.

The Abbey, Nuns' Refectory and surrounding land remained a farm until they were leased in 1947 to the Ministry of Works, which later transferred them to English Heritage. The abbey, partially restored in the 1960s, is open to the public alongside the Farmland Museum, who manage the Abbey on behalf of English Heritage.

The Farmland Museum, which opened in 1997, has a shop, cafe and an Education Centre, running courses for local schools. Farm buildings and a 17th-century stone barn have been converted into displays of local history and farming, including a 1940s farm labourer's cottage, a 1930s village shop, displays on local crafts and skills. Many of the old farm tools and machinery came from a museum at nearby Haddenham which closed. The whole site, known as Farmland Museum and Denny Abbey, is open from April to October, and there are regular special event days.[7]

Note: The spellings Denny and Denney appear with equal frequency in the historical literature. The latter spelling is no longer used locally, in modern times.