Deerhurst is a village near Tewkesbury in Gloucestershire on the east bank of the River Severn. The Severn in this vicinity forms the county border with Worcestershire and the village of Chaceley stands on the opposite bank in that county.

According to legend, the village was once the home of a dragon, said to have been swept in on the River Severn.[1]

Deerhurst has an Anglo Saxon partly 10th century monastic building still standing, St Mary's Priory Church. It is notable among Anglo-Saxon buildings for the many features of the period which can be observed.[2][3][4]

Remarkably, there is a second important Anglo-Saxon building in the village, Odda's Chapel, a Saxon church, standing about 200 yards south-west of the church. An inscription dates this precisely to the reign of King Edward the Confessor.[5]

The village suffered badly from the floods of 2007 and local residents were seen on the local BBC news network, Midlands Today. Pictures of the floods can be seen at the Flooding Blog. 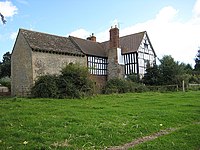