Deene Park, the seat of the Brudenell family since 1514, is a country manor located 5 miles northeast of Corby in Northamptonshire. Seven of the Brudenell family were Earls of Cardigan, of whom the most notable was James Brudenell, 7th Earl of Cardigan, who led the Charge of the Light Brigade at the Battle of Balaclava in 1854. The earldom however merged with the Marquessate of Ailesbury, and the estate has descended to Edmund Brudenell. 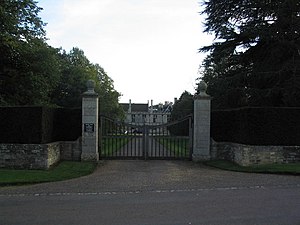 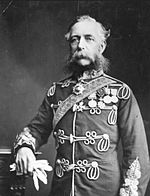 Deene was purchased by Sir Robert Brudenell, the become Chief Justice of the Common Pleas to 1530. The manor of Deene though belonged in freehold to Westminster Abbey; an annual rent of £18 was paid until 1970.[1]

The manor house has been expanded around its courtyard from its sixteenth-century core, represented by its great hall, which was given its screen panelling and fireplace in 1571.[2] The early 19th-century Bow Room contains the Brudenell library, collected in the 16th century by Sir Thomas Tresham and his son-in-law, Sir Thomas Brudenell, 1st Earl of Cardigan, though the collection no longer includes the manuscript of Chaucer's Canterbury Tales[3] nor the last copy of Magna Carta in private hands.[4]

The house contains furnishings of different periods and portraits, including works by Joshua Reynolds and Thomas Gainsborough. Relics of the Crimean War include the uniforms of Lord Cardigan and the head and tail of his charger, Ronald.

The large gardens designed by David Nightingale Hicks feature a parterre overlooking the lake, and a newly planted avenue.

The manor is located in the countryside not far from the Harringworth Viaduct and is surrounded by historic villages and hamlets. St Peter's Church, Deene, in the grounds, has the funeral monuments of the Brudenells.