Dalkey Island, for which the nearby village of Dalkey is named, is a small, uninhabited island of County Dublin, lying just three hundred yards offshore, about ten miles south of the City of Dublin and two miles south of Dún Laoghaire harbour. It was an important site of pilgrimage for centuries, and has been known as 'St Begnet's Isle' since records began. The earliest reference to the name 'Dalkey Island' is from about 1782.

Dalkey Island, with Howth in the background

The island is currently uninhabited but there is evidence of human occupation dating back to the Neolithic period. The remains of field systems, a church, a 'cairn' burial, a gun battery and the Martello Tower still exist. There are two 'Holy Wells'; one on the western shoreline known locally as the 'Scurvy Well' is located within a surrounding stone structure. There is also a bullaun stone formed from an earthbound boulder. This may have been used as a pagan altar but it was 'christianised' in the 7th century by carving an early Christian cross on the face. This lies close to the remains of the church.

At the northern extreminity of the Island there is evidence of a deep ditch or fosse that was the boundary of a mediæval promontary fort.

The whole island covers just 22 acres. From Bulloch Harbour, it is possible to visit the island.[1] Also a regular ferry operates from Coliemore Harbour during the summer months.

Dalkey Island, only five minutes by boat from Coliemore Harbour, is an important site of ancient and historic remains. Artefacts from the island, now housed in the National Museum in Dublin, provide evidence that the island's original occupants were from the Mesolithic, or Middle Stone Age; the evidence is of habitation in the 4th millennium BC (6,000 years ago). There was continued use of the site through the Neolithic, Iron Age and Early Christian period.

In the Dark Ages the island was used as a Viking base. A number of early Mediæval pieces of pottery and glassware were found on the island. Some of these artefacts came from Mediterranean area, possibly Turkey or Greece.[2]

Dalkey Island was an important site of pilgrimage in the mediæval period as evidenced by the prominence of the island on early maps. One such, Danti's map of 'Isole Britaniche' painted on the wall of the Palazzo Vecchio in Florence (c1560) survives as a remarkable record. It was believed that 'taking' water from the well attributed to the saint could cure scurvy. Recent tests to the water show that it has high levels of vitamin C (the cure for scurvy), probably due to its position below a salt marsh. There are ruins of a church, dating to the 7th century which is named for St Begnet. An older wooden church was probably here before the present stone one was built. Another church in nearby Dalkey village also named for St Begnet may have been a 'base' for pilgrims before they crossed the sound to the island. 'Pilgrim badges' would have been sold in the town which would be eventually sewn into their burial shroud to prove that they had undertaken the pilgrimage, helping their journey through the gates of heaven.

On the orders of Henry VIII as part of his dissolution of the monasteries, St Begnets was raided in 1539. The ornaments and plate raised 36 schillings for the crown.

In the early Christian period, the town of Dalkey was called 'Kilbegnet'. The earliest reference to 'Dalkey Island' is to be found on a map printed for 'Barnard’s New, Complete and Authentic History of England’ printed c1782'. This was about the time that the island was becoming a site of British military ordinance. There is also a reference to it on a copy of the Downs survey of about the same time.

The church on the island was altered during this period on the east side, when builders used it as living quarters while building the nearby Martello tower and gun battery in 1804. .[3]

Extensive archaeological excavations took place in the late 1960's (Liversage) which uncovered evidence of a churchyard and a number of burials. The skeletons were not exclusively male, as has been suggested but they were in the majority in keeping with the understanding that it was an early Christian monastic site.

A promontory fort was located at the northern end of the island, designed to help protect Dalkey village, which was the main deep water port for Dublin in the Middle Ages. Its presence is visible today in the form of a ditch. The remains of a child (probably a plague victim) were discovered, discarded rather than buried in the ditch during the 1968 excavation. The remains may also have been that of a young slave of the Norse occupiers (comparisons to the remains found in Llanbedrgoch on Anglesey would suggest this) but accurate dating tests have not yet been carried out.

The ruined stone church may be as old as the 7th century and was probably abandoned for a period when the Vikings used the island as a base and there is evidence that the island was used as a slave market during this period. The Annals of the Four Masters says that in 938. Coibhdeanagh, the Abbott of Cill-achaidh, drowned in the sea off the island trying to escape with treasures from the church hidden in his vestments during one Viking raid.

In the early 19th century the Admiralty erected the Martello Tower, one of eight dotted along the Dún Laoghaire coastline, as an early warning defensive device against the one time threat of invasion during the Napoleonic Wars.

A herd of goats, originally put on the island in the early 19th century, remains there today but they are replacements of the original goats who were removed 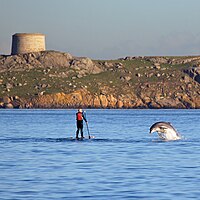 The island is also an ideal spot for fishing, with pollock, coalfish, wrasse and mackerel being caught.

The waters around Dalkey Island are much used for sailing, angling and diving. Rocks known as Maiden or Carraig Rock, Clare Rock and Lamb Island all to the northwest form part of the ridge of the Island. Parts of these rocks are only visible at low tide. The southern end of the Island is a favorite with kayakers especially on the flooding tide. There can be a substantial overfall here and in a south east wind can be extremely challenging for the kayaker. When kayaking around the Island on a flood tide it is easier to go in an anti clockwise direction.

Dalkey Island is home to a colony of seals which has greatly expanded in recent years. Black rabbits and herd of wild goats live on the island also.[4] Birdwatch Ireland have established a colony of roseate terns on Maiden Rock just north of the Island: Ireland holds most of the European population.

The Rocks to the east of the Island are known as "The Muglins" and are a different group or chain. These form a danger to shipping and have been fitted with a distinctive beacon. The beacon stands on the site of what was once a 'gibbot' where the bodies of two pirates, Peter McKinlie and George Gidley were displayed following their execution for the murders of Captain Cockeran, Captain George Glas and his family and others on board the ship 'Earl of Sandwich' in 1765. Their remains lie buried under the concrete plinth base of the beacon.[5]