Cumbernauld Airport (ICAO: EGPG, FAA LID: CBN) is a local airfield in the eastern part of Dunbartonshire close to Cumbernauld and 16 nautical miles north-east of Glasgow.

A stretch of the Antonine Wall runs through the aerodrome, as does one of Wade's Military Roads.

The airfield is primarily used for the training of fixed wing and rotary wing pilots; it also has a helicopter charter company and a light aircraft charter operation along with aircraft maintenance facility.

Cumbernauld Aerodrome has a Civil Aviation Authority Ordinary Licence (Number P827) that allows flights for the public transport of passengers or for flying instruction as authorised by the licensee (Cormack Aircraft Services Limited).[1]

The new airport was opened by the Cumbernauld Development Corporation in the late 1980s. Before the new airport was constructed there was a grass strip in use on the same site. During the early years of the airport's new incarnation there was even an airshow, the highlight being a display by the Red Arrows and a mock dogfight between a Supermarine Spitfire and a German Messerschmitt Bf 109 fighter. 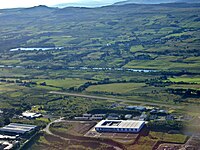 Also located on the airfield is the active West of Scotland strut of the Light Aircraft Association (formerly the Popular Flying Association).