Cultra is a village by the sea in County Down, on the south shore of Belfast Lough. It has become a residential, suburban area near Holywood, and effectively part of "Greater Belfast". The significance of Cultra is the presence of so many important institutions here.

Cultra is home to the Royal North of Ireland Yacht Club, and also the site of the Ulster Folk and Transport Museum.

The Ulster Folk and Transport Museum 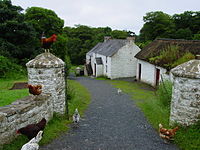 Farmyard within the Ulster Folk Museum

The Folk Museum houses a variety of old buildings and dwellings which have been collected from various parts of Ireland and rebuilt in the grounds of the museum, brick by brick. 170 acres are devoted to illustrating the rural way of life in the early 20th century, and visitors can stroll through a recreation of the period's countryside complete with farms, cottages, crops, livestock, and visit a typical Ulster town of the time called "Ballycultra", featuring shops, churches, and both terraced and larger housing and a tea room.

Regular activities include open hearth cooking, printing, needlework, and traditional craft demonstrations. The allocation of a considerable sum of lottery money has enabled the museum to build a large outhouse in the centre of Ballycultra town. This new structure houses unusual relics from Ulster's past, such as an unusual waffle iron from the mid-19th century, an old 'poteen' distillery from Portmore and the first twin axle bicycle ever seen in Ireland. A little more offbeat is the 'Worlds Largest Sausage', a 17-foot-long (5.2 m) banger, the creation of Newtownards man Seamus McTavish. All these new developments have aided UFTM in developing a new visitor base and have gained the site international recognition.

Indoors, the Folk Galleries feature a number of temporary exhibitions. These have included They Love Music Mightily, an exhibition featuring contemporary recordings of Irish traditional music, and Meet the Victorians, a "lively and interesting exhibition" focusing on aspects of Victorian life.

The Museum is the holder of Northern Ireland's main film, photographic, television and sound archives. The Museum holds the BBC Northern Ireland archive of radio and television programmes, and also possesses over 2,000 hours of sound material broadcast between 1972 and 2002 by the Irish language radio station RTÉ Raidió na Gaeltachta, from its studios in Derrybeg, County Donegal. The museum also maintains an archive of Ulster dialects, and a large library containing over 15,000 books and periodicals. The archives and library are open to the public during office hours.

Other sights in Cultra