Crumlin is a village in County Antrim, at the head of a wooded glen on the Camlin River, near Lough Neagh, and twenty miles west of Belfast city centre. It had a population of 5,099 people in the 2011 Census.

Belfast International Airport lies just north of the village at Aldergrove. The village hosts the Northern Ireland headquarters of Lidl.

The name of the village is from the Gaelic Cromghlinn, meaning "crooked glen"[1]

A stone clock tower, built in 1897 as a memorial to a member of the Pakenham family who were landlords in the area, stands at the top of the village near the former railway station.

In 1972, during The Troubles, a bomb went off prematurely near Crumlin, killing two IRA members. 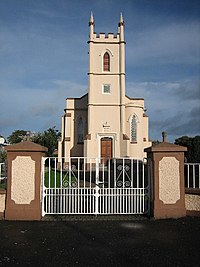 The social mix of Crumlin has changed dramatically in recently decades. Once this was a majority Protestant village, with an active Orange Lodge, but in recent decades Crumlin's population has grown with new suburbs filled with an influx of residents from Belfast and surrounding areas the majority of whom have been form the Roman Catholic / nationalist community, with the result that Crumlin now has a significant nationalist majority. Until recently, Orange Order parades still occurred without incident and the main street in July is decorated with an Orange Arch which flies unionist flags from it.[2]

In 2012, The Twelfth celebration for a wider area was held in Crumlin for the first time in 12 years, a march which surpassed previous parades in terms of size and the number of bands and participants taking part.[3]

Crumlin railway station opened on 13 November 1871 but is now closed.[4]