From Wikishire
(Redirected from Cruden Water)
Jump to: navigation, search 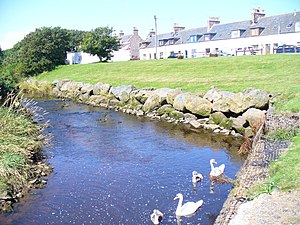 The Water of Cruden in Cruden Bay

The Water of Cruden is a little river in Aberdeenshire, reaching the North Sea at at the wee port village of Cruden Bay.

The river runs entirely in the coastal plains of Aberdeenshire, rising in the springs on the shallow hills here and running eastwards to the village of Hatton, below which it is joined by a stream named the Laeca Burn, known for its ancient archaeology.

The river then enters Cruden Bay village and its mouth forms a little harbour for the village and here it finally meets the sea in the Bay of Cruden.