Croy is a village in the parish of Cumbernauld in the detached part of Dunbartonshire. A former mining community, Croy is situated some 13 miles from Glasgow and 37 miles from Edinburgh on the main railway line between the two cities.[1] Croy railway station is the transport hub for the surrounding area and is one of the busiest stations in the Central Belt. The station has frequent services 7 days a week to Glasgow, Edinburgh & Stirling. The station has undergone significant expansion in recent years including extended platforms, increased car parking facilities and a new station building & ticket office. Further improvements and maintenance are expected until at least 2017. 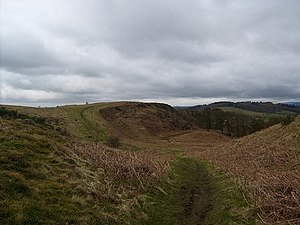 View of the outline of the Antonine wall at Croy Hill

On Croy Hill, to the north east of the village, are remnants of the Antonine Wall, built by the Romans between AD 142 and 144, including a fort and two beacon platforms.The fort is not visible on the ground today, but the Antonine Wall ditch is easily identifiable across much of Croy Hill. Croy Hill’s high position offers one of the best views of the surrounding landscape, including the Firth of Forth and hills of Fife to the east, the Kilsyth Hills to the north, and the next fort at Bar Hill to the west.[2] A tombstone was found at Croy Hill, showing a soldier flanked by men, possibly his sons. Other finds include a bronze arm purse, now in the Hunterian Museum. Croy was a key point in the Roman-built Antonine Wall.

[3] The modern settlement of Croy as it appears today was primarily the result of a coal mine being established in the mid 1800s. This attracted a sizable population of Irish immigrants to the area seeking employment and is the reason for the villages strong Roman Catholic origins. A single row of original miners cottages are still present and in use on the Constarry Road high street. They feature a highly distinctive red brickwork and are exceptionally well preserved. The local residents affectionately refer to the row as Coronation Street - due to the similarity with the houses of the iconic UK television series. 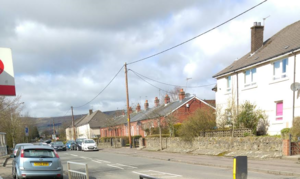 Croy has a Roman Catholic primary school (Holy Cross primary)[4] and a large Catholic Church (Holy Cross Church) that services a substantial congregation from all over the local area. The Church has been established for over 100 years and has some impressive architectural features. The church bells are rung prior to each service and can be heard throughout the whole village. [5]

Another impressive architectural feature of the village is the Croy Railway Viaduct (known locally as the four arches). Built in the mid-1800s, the viaduct can be accessed via a heritage path running alongside Croy Station. The path was redeveloped with the Croy station improvements and is now well sign posted and more easily accessible than previously. 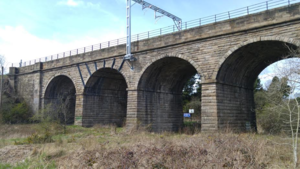 A notable feature of the village is the Croy Shrine located in the Nethercroy area to the North East. The Shrine was built around a natural spring in the mid 70's by local residents and featured a statue of The Virgin Mary in a grotto scene with a stone channel in front to allow access to the spring water.[6] The Shrine fell into a state of disrepair over the years due to neglect and vandalism. In 2013 some local residents rebuilt it and a rededication ceremony was held in 2014. 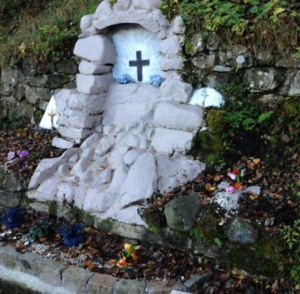 Newly restored Croy Shrine in 2014. The decision was taken to have an embedded cross as the focal point instead of a statue to prevent future vandalism.

Amenities in the village include a newsagents/post office, Chinese takeaway, Indian takeaway, bakery, barbershop, and Salon. The village once had a pub named the Celtic Tavern, later known as The Croy Tavern, but this ceased trading in the early 2000s and was eventually demolished. A car wash now stands in its place.

In 2012 a state of the art £1 million pound sports facility was opened in the village.[7] Spearheaded by local residents and part financed by North Lanarkshire Council,[8] the facility is home to a full size 3G football pitch with enclosure and stadium quality floodlighting, a community pavilion with changing rooms and meeting area, and additional goalposts and line markings to allow conversion to 3 smaller football pitches when needed.

People of note with links to the village include folk singer and accordion player Will Starr,[9] and world champion boxer Pat Clinton.[10]