Croome Court is a mid-18th century Neo-Palladian mansion surrounded by an extensive landscaped parkland near Pershore in south Worcestershire. The mansion, and park, were designed by Lancelot "Capability" Brown with some of the internal rooms designed by Robert Adam.

The house and parkland was the first landscape design by the great Lancelot 'Capability' Brown,[1] and his first major architectural project.[2] As such, it is an important and seminal work.[2] 'Capability' Brown started work at Croome in 1751 for George Coventry, 6th Earl of Coventry. The mansion house was designed by Brown and is a "rare example of his architectural work" and was his "first flight into the realms of architecture".[3] Robert Adam designed parts of Croome Court's interior and along with James Wyatt, designed temples and follies for the park. 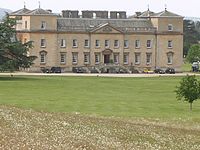 Croome Court was designed by Lancelot "Capability" Brown with the assistance of Sanderson Miller. It was built between 1751 and 1752, and along with Hagley Hall (built between 1754 and 1760), they are considered to be the finest examples of Neo-Palladian architecture in Worcestershire. Notable Neo-Palladian features incorporated into Croome Court include the plain exterior and the corner towers with pyramidal roofs (a feature first used by Inigo Jones in the design of Wilton House in Wiltshire). [4] 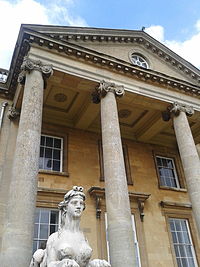 The long gallery was designed by Robert Adam and was installed between 1761 and 1766. It is the best preserved of the original interior (little of the rest has survived in situ ).[4]

The house has been visited by George III,[5] Queen Victoria and George V. During the Second World War it housed the Dutch royal family, who were escaping the Nazi occupation of their homeland. For part of the war it also housed RAF Defford.[6]

In 1948 the Coventry family had to sell the Court.[5] After the war it was used as a school (1950s-1979) and briefly (1979-84) by Hare Krishnas.[6] It lay empty for 12 years until rescue arrived (though at expense of part of the walled garden being built on for garages) and it was patched up and it became a private home once more with its 17 bedrooms.

One room was removed and is displayed in the Metropolitan Museum of Art in New York: The Tapestry Room "George William, sixth earl of Coventry, commissioned this set of tapestries in Paris in 1763 for the tapestry room at his country seat, Croome Court (Worcestershire), which was then being remodelled by Robert Adam".[7]

In November 2007, Croome Court was bought from the private owner by The Croome Heritage Trust who have leased it to the National Trust for 10 years who will manage it whilst raising funds for its restoration.[5] 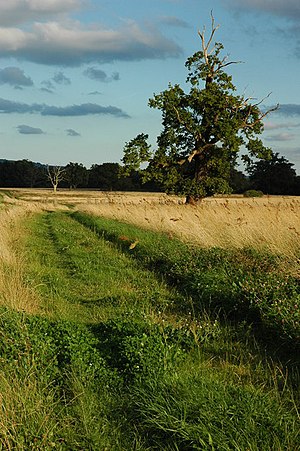 A pasture in Croome Park

Ann, the wife of the 2nd Earl, was a friend of the poet and avant-garde gardener William Shenstone, and they developed the first garden at Croome. It was around this time that the first kitchen garden was laid out. It would later be encased in walls and possibly by Gilbert, 4th Earl, who is known to have made large changes to both the house and the garden. The earliest plan for a walled garden dates from about 1750, when George William Coventry, the heir of the 5th Earl, changed the shape of the walls from square to the rhomboid shape that exists today. This created a garden of over 7 acres, which may have made it the largest 18th-century walled garden in Europe. The increase in size allowed the walls to encompass the new greenhouse on the eastern side of the garden. The date that the walls were finished is uncertain, but there is evidence that they must have been completed by 1752.[8]

Over the decades, the shape of the gardens has transformed from a traditional square to the unique rhomboid shape revealing over seven acres of garden which still stand today.

Unlike the grange and the park, the walled garden was largely unchanged by Capability Brown, but it did receive new hot houses. In 1766 a stone-curbed pool for which Robert Adam designed a sundial. In the early 1800s a 13-foot east/west hot wall, serviced by five furnaces, was built. It is historically significant because it is one of the first ones ever built.[8]

During the 20th century the garden was abandoned, and fell into disrepair.[8] Restoration work on the walled gardens began in 2000; they are gradually being restored.[9] The restoration work revealed a number of hidden gems to the owners, Chris and Karen Cronin...

Today, The Walled Gardens showcases the fully restored melon and cucumber house and the peach and fig house, alongside the converted vinery house. The foundations still remain from the original tomato house, forcing beds, pineapple pits, and orchard house all which will be restored in years to come.

After three years of dedicated restoration the melon and cucumber house now channels the rain water from its roof into a large storage tank under the terrace which is then pumped inside through a network of pipes to water an array of produce from vines to bananas, fully supporting the owners' ethos of sustainable and eco-friendly living.

The mechanical inventions of the 18th century have been put to their test in the peach and fig house, with the creation of bespoke steel winding mechanisms to open and close groups of sash and hinging panels, mimicking the old brass rollers now replaced with oil impregnated nylon in stainless steel housings.

The Dipping Pond was commissioned by the famous Capability Brown and constructed in 1764; this is one of the gardens most significant features listed in the Croome Archives. It acquired its name from the function of dipping buckets to collect water to distribute around the garden, and for the nearby horse stable block. As a crucially significant element of the gardens history, The Dipping Pond has undergone extensive restoration. It has been completely rebuilt with the addition of a new pressurised water system that has been linked up to a redundant well nearby, creating a pumping station for watering the future vegetable beds within the gardens.

As a by-product of capturing pure rain water, the Dipping Pond has become a new haven for various forms of wildlife, with some rare species of frogs and newts being spotted.

A key phase in garden history between the late 1700s and early 1800s saw the introduction of hot walls and heated cavity walls. This became redundant by 1845 due to the abolition of the glass tax and emerging technology in hot houses.

The hot wall at The Walled Gardens, constructed in 1806, is the largest of its kind, stretching 100 yards in length and 10 feet in height. Much like the later Glass Houses and forcing beds, the purpose of creating a non-indigenous climate within the gardens, to propagate and extend the growing seasons for fruits and vegetables. The orientation to the wall is sympathetic to the rise and fall of the Sun, not simply east to west, but to maximise heat and light against its southern face.

However, sun was not the sole source for the heat of this wall; during the restoration five underground furnaces were discovered that spread along the northern face of the wall. The furnaces were all backfilled with cobble stones, which now make up the beautifully cobbled garden paths. 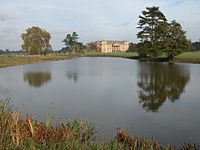 Croome Court from across the ornamental lake 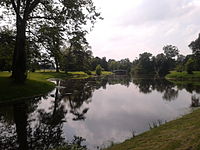 Croome lake with a footbridge and the islands

Croome Park has a man-made lake and river, statues, temples and other buildings with the Court as the central focus. The other buildings around the park include Gatehouses, a Grotto, a Church and buildings termed "eye-catchers". These are Pirton Tower, Panorama Tower, Dunstall Castle and Park Seat. They are set away from the core of the Park and are intended to draw the eye into the wider landscape. Croome and Hagley Hall have more follies and other similar features than any estate in the Britain.

The National Trust own and have restored the core of the original 18th century parkland and it is opened to visitors throughout the of the year. To visit many of the features below, you have to enter the pay for entry National Trust parkland. Some areas, however, are accessible via public footpaths.