Craig-y-nos Castle is a Victorian-Gothic country house at the head of Cwm Tawe, the valley of the River Tawe, in Brecknockshire. The house is built on parkland beside the River Tawe, on the south-eastern edge of the Black Mountain.

The name of the house means "Rock of the Night".

The castle, formerly owned by opera singer Adelina Patti, is now a boutique hotel, catering, conferencing and entertainment venue. Adjoining the castle are its landscaped grounds which now serve as a country park, managed separately by the Brecon Beacons National Park Authority.

The main building was built in 1841–43 by Captain Rice Davies Powell, who became a county magistrate and a High Sheriff of Brecknock. A family legend insisted was that the family were cursed thanks to their bloodline relationship with the Dutch Overbeek family of Calcutta and Cape Town, whom Captain Powell had diddled out of an inheritance,[1] to explain a series of deaths: cholera took his younger son in 1851; his wife and younger daughter died before him; in 1864 his eldest son was killed in a hunting accident on the Isle of Wight. As a result, Captain Powell's eldest daughter Sarah's inheriting the estate, and she moved in with her husband Captain Allaway. After Allaway died in 1875, Sarah moved to Tenby, before the property was sold in 1876.

After the estate entered into the trust of the Chancery, it was bought by Morgan Morgan of Abercrave for £6000 in 1876. Mr Morgan and his family, plus his son also called Morgan Morgan and his family, lived jointly in the castle for several years. The family cleared a large plantation of 80-year-old fir trees which stood between the castle and the quarries above, which were said to be home to a local population of red squirrels. 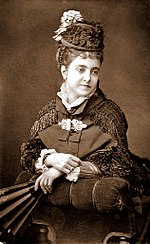 Adelina Patti purchased the castle and surrounding park land for £3500 in 1878, to develop it as her own private estate. The prima donna had reached the soaring heights of a spectacular career. She spent the rest of her life at Craig-y-nos, leaving it only to sing in the premier opera houses of Europe and to tour the United States, captivating the world with her flawless soprano voice.

After her second marriage, to French tenor Ernesto Nicolini, she embarked on a major building program at the castle, adding the North and South wings, the clock tower, conservatory, winter garden and theatre. After making her last public appearance in October 1914, when she sang for the Red Cross and filled the Albert Hall, she spent the rest of her life at Craig-y-nos with her third husband and staff.

Craig-y-nos was probably the first private house in Wales to be wired for electricity: The first in Britain was Cragside in Northumberland in 1880, a year after the invention of the electric light bulb by Thomas Edison.[2] An Otto engine in the grounds created a 110 V DC system, with distribution provided by two bare copper wires placed in two adjacent grooves carved into a plank of wood, with a second plank placed over the top of it. This supplied power for Swan lamps throughout the castle, and an electrically powered orchestra organ which was controlled by a punched paper roll, situated in the French billiards room. The organ was the pride and joy of her second husband, French tenor Nicolini, thus dating installation prior to his death in 1898.

The Neath and Brecon Railway railway station at Craig-y-nos/Penwyllt was in part funded by Patti.[3] A private road was constructed from the castle to the station, where a lavishly furnished private waiting room was installed. In return the Neath and Brecon Railway was commissioned to provide Patti with her own private railway carriage, which she could request attached to any train to take her whenever, and wherever within the United Kingdom, she wanted to travel.

At the start of the 20th century, Patti had one of the first motor cars in Wales, and is reported to have raced a local doctor from Swansea to Abercrave for a small wager.

After Adelina Patti's death in 1919, the castle and the grounds were sold to the Welsh National Memorial Trust for £11,000 in March 1921, an organisation founded to combat tuberculosis in Wales. Reconstructed as a sanatorium and called the Adelina Patti Hospital at the request of her widower, it admitted its first patients in August 1922. In 1947, the children of Craig-y-nos were among the first in the UK to receive the first effective TB medicine, the antibiotic streptomycin.[4] In 1959, it became a hospital for the elderly. The castle closed as a hospital on 31 March 1986, after the transfer of remaining patients to the new community hospital at Ystradgynlais.

More information about Craig-y-nos' time as a TB hospital may be found in the book 'The Children of Craig-y-nos' by Ann Shaw and Carole Reeves. Clive Rowlands, a famous rugby player, was one of its patients, being admitted in 1947, as an eight-year-old. He was given a rugby ball as a gift and accidentally kicked it through a glass door, for which he was put in a straitjacket for a week.

In a project supported by the Heritage Lottery Fund, the Sleeping Giant Foundation charity, the Wellcome Trust Centre and University College of London, in 2007 an exhibition at the Welfare Hall, Ystradgynlais, showed relics and recorded recalls of patients from its time as a TB sanatorium.[4]

The Welsh Office declared Craig-y-nos Castle and its unique theatre surplus to requirements soon after the opening of the new Community Hospital in nearby Ystradgynlais. In 1988 the Freehold of the property was sold to a consortium of businessmen who formed the Craig-y-nos Castle Company Ltd. After a long period of repair and restoration, the castle opened to the public as a functions venue but was badly hit by the economic recession of the early 1990s.

Craig-y-nos Castle was then sold to (medical) Doctor John Trevor Jones and his wife Penelope, who continued the essential repair work including the complete renewal of the theatre's courtyard doors, installation of new central-heating system, re-roofing the theatre and much more, while organising national antiques fairs, musical events and wedding receptions – all to generate income to plough back into the rescue of Patti's castle. On reaching retirement age in October 2000 they sold Craig-y-nos to SelClene Ltd. SelClene continued the restoration, and opened the castle as a hotel.

In 2005, the castle featured in the BBC Doctor Who episode Tooth and Claw, featuring David Tennant as the Doctor and Billie Piper as Rose Tyler.[5] The Torchwood crew later stayed at this hotel and filmed some scenes when filming Countrycide.[6]