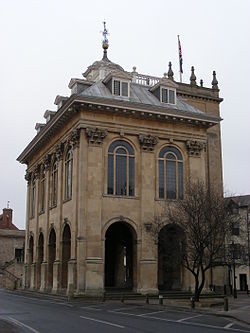 County Hall stands in the centre of Abingdon in Berkshire; a grand seventeenth century shire hall, it was for many years the headquarters of the Berkshire magistrates, and from where the county was governed. Today it is a local museum, supported by Abingdon Museum Friends,[1] a registered charity.[2] 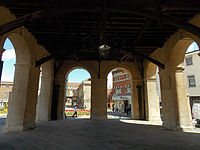 Internal view of the loggia

The hall was built between 1678–83 and was most likely designed by the stonemason Christopher Kempster, who trained with Sir Christopher Wren on St Paul's Cathedral.[3] It is built in the Baroque style and originally housed a courtroom for Assizes.[4] The hall stands on pillars with a sheltered area beneath for use as a market or other municipal functions; a feature typical of many town halls of that age, though rarely with such grandeur.

Nikolaus Pevsner said of the building: "Of the free-standing town halls of England with open ground floors this is the grandest".[5]

The museum's collections were started in 1919. The museum has permanent collections and presents temporary exhibitions several times a year. There are also smaller exhibitions on local themes that are changed every month.[6]

On 1 December 2011, with the help of British Motor Heritage,[7] the last MGB Roadster sports car off the production line in Abingdon in 1980 was lifted through a window 30 feet up, for display in the museum's main gallery from 2012.[8]

The Monks' Map of the River Thames around Abingdon in the 16th century has been held at the town's Guildhall since 1907.[9] After conservation, it has been redisplayed at County Hall from its reopening in 2012. A reproduction of the Anglo-Saxon Abingdon Sword, discovered in the river at Abingdon and held by the Ashmolean Museum in Oxford, is also on display.

Some of the most important items in the museum are available online in an eHive database.