Coton Manor is a modest country manor house in Coton in Northamptonshire, built in the 17th century Restoration period and developed and extended in the 1920s. It is todaty a Grade II listed building.[1]

The gardens and bluebell woods are a popular visitor attraction. 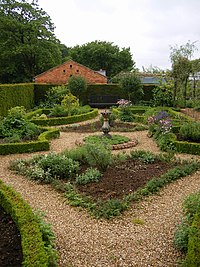 The manor is found listed in the Domesday Book. An early house stood here, but was destroyed in the Civil War.

In 1662, the owner built a new house, using stone salvaged from nearby Holdenby House. In time though the estate declined and the house was a farmhouse by the 1800s.[2]

In 1926 the house and garden were purchased by new owners, arrivied from Florida. They sympathetically extended the building to create a quintessential manor house with a garden. It has remained in the family since then.

The garden has been developed continually, and is now opene to visitors; thousands come to visit the garden each year.

The house however remains a private home. 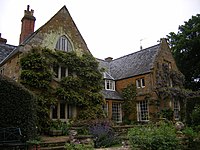