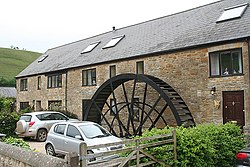 Corton Denham is a village and parish in southern Somerset, situated seven miles north-east of Yeovil. The village has a population of 189.[1] The ancient parish forms part of the hundred of Horethorne and extends to the border with Dorset.[2]

The village was named Corfetone in the Domesday Book of 1086, coming from the Old English meaning the settlement in a cutting. The second part of the name comes from the Dynham (later Dynham) family who held the manor from the 12th century until 1509.[3]

In the 19th century an iron waterwheel was installed at Whitcombe Farmhouse.[4]

The parish Church of St Andrew was rebuilt 1869-1870 to a design of Charles Barker-Green for the Rev W.B Portman and the patron Lord Portman of Orchard Portman.[5]