Connah's Quay is the largest town in Flintshire. It stands on the River Dee, near the border with Cheshire. Connah's Quay is at the heart of Flintshire's industrial area, Deeside Industrial Park. The major part of Corus Steelworks lies on the town's border on the north bank of the River Dee. Wepre Woods, an ancient woodland in the town, is controlled by local Ranger Service and includes Ewloe Castle which dates from the 13th century.

No one knows where the town's name came from, but it is relatively recent: the docks became known as "Connah's Quay" some time after the 1860s. Some assert that Connah was a former landlord of "The Old Quay House", a public house which still lies on the docks in what is now the west side of the town. Others say that Connah was a man who owned a chandlery on the docks. It has also been said by some that a Mary Connah owned the dock, from which travellers from Cheshire staithes opposite would ask to be taken to "Connah's Quay".

The dock itself was connected by the Wrexham, Mold and Connah's Quay Railway to the nearby town of Buckley, chiefly to transport fire-clay and pottery products. It grew from this small port which included a shipyard and now encompasses the former hamlets of Wepre, Kelsterton and Golftyn. 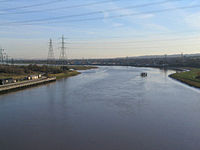 The Dee at Connah's Quay

In the last decade several large housing developments have been built in Connah's Quay and the town has a booming property market, with house prices steadily increasing. The town appeared to have finally shaken the effects of the mass redundancies from major employers in the 1970s and 1980s, but recent surveys show that the number of unemployed men of working age within the Connah's Quay area is rising year by year. 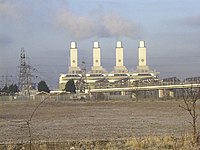