Coldingham Sands from Homeli Knoll, with St Abbs over the headland

Coldingham Bay is an inlet in the North Sea coast of Berwickshire, two miles north of the town of Eyemouth. It is easily reached by a minor road which leaves the B6438 road at Coldingham.

Coldingham Sands lie in the bay forming a large beach which attracts many visitors: on busy days there can be over a thousand visitors on the beach.[1] Coldingham Sands is an award winning sandy seashore which is a rare occurrence on Berwickshire's rocky coast.

The beach, which is approximately 200 yards wide, is well sheltered by headlands to the north and south (Yellow Craig Head) with rocky sections at both extremities of the sand. The beach is popular with surfers and bodyboarders; a lifeguard attends the beach during busy summer periods. The north end of the beach has 55 beach huts, some of which are believed to be 100 years old. The huts are leased from the council, which own the sands, but not the huts.[3] At the top of the high ground above the huts are several private dwellings plus the Dunlaverock House hotel.[4][5] 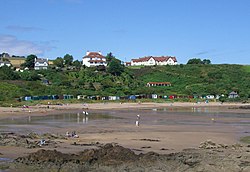 The north side of the beach showing the beach huts

The Bay and its surroundings

Coldingham Bay is situated within the St Abbs and Eyemouth Voluntary Marine Reserve and the North Northumberland Coast Special Area of Conservation. The rocky shore around the bay has much marine life with many types of sea creature and seaweed to be found. The large area of tide pools are popular with rockpoolers. Slightly inland from the seashore is an area of dunes and grassland which provide a fragile habitat for a host of plants and animals. Visitors are requested to keep to the paths, not to pick flowers or light fires in this area to protect the environment.

The Berwickshire Coastal Path goes round the perimeter of the bay and provides walks that give easy access to St Abbs and Eyemouth. At the southern extremity of the beach lies Homeli Knoll (or Knowe), a steep sided hillock which provides fine views of the beach area and along the coast. The south facing slope of the Knoll has seen sightings of the Small Blue butterfly and its sole larval foodplant Kidney Vetch Anthyllis vulneraria grows there. The north slope of the Knoll is a popular site for cowslip.[1]

Milldown Burn flows into the southern part of the Bay and is its main inflowing water source, rising on Coldingham Moor and running for four miles through the village of Coldingham before reaching the Bay. On the north side of the bay stands The Kip, an 26-foot high sea stack which stands on dry land at low tide. At the southern extremity of the bay are the hundred-foot high grassy cliffs of Yellow Craig.

Coldingham Bay has two other accommodation facilities for visitors. The St Vedas Hotel was built in 1897 and apart from supplying the usual amenities of a hotel also provides surfing facilities such as a surf shop, lessons, equipment hire and repairs.[6] The Coldingham Sands Youth Hostel, another late 19th century house, was closed in early 2008 after low visitor numbers deterred the investment needed to bring the hostel up to an acceptable standard. However local residents are trying to purchase the hostel under the Community Right to Buy legislation and keep it open for visitors who bring trade to the area.The application to purchase the hostel was declined in February 2009 by Lottery Funds, and the fate of the hostel now remains uncertain.[7]