Clifford is a village and parish in the Huntington Hundred of Herefordshire, four miles to the north of Hay-on-Wye. It lies on the south bank of the River Wye, which here forms the border with Radnorshire. Through the village runs the B4350 which is the main road.

The civil parish also includes the hamlets of Priory Wood and Hardwicke, with a population of 511 in 2011. There has been a slight decrease in population, which had stood at 530 in the 2001 census.[2] Newton Tump is the remains of a motte-and-bailey castle three miles south-east of the village.[3]

In the 1870s, Clifford was described as:

"The village stands on the river Wye, adjacent to the Hereford and Brecon railway, 2 miles NNE of Hay; and has a post office under Hereford. The parish includes also part of Vowmine township. Acres, 6, 522. Real property, £6, 209. Pop., 895. Houses, 207. A castle was built here by W. Fitzosborne; became the seat of the Cliffords of Ugbrooke; and was the birthplace of Jane de Clifford, "Fair Rosamond, " the favourite of Henry II."[4]

The Village has a parish church which is dedicated to St. Mary. The church is made up of an ancient structure in a Norman style, and there are several monuments within the church.[5] 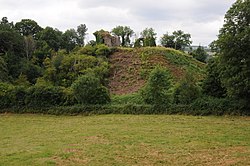 The ruins of the Norman Clifford Castle are in the village.

Clifford Castle is a "traditional motte and bailey castle" which[6] stands next to the River Wye on the border between England and Wales, it "covers an area in excess of 4 acres".[7] The castle was founded by Earl William Fitz Osbern between the time of his being made Earl of Heredford in 1066 and his death in 1071.[8] "Clifford Castle is one of five castles mentioned in the Domesday Survey of 1086".[9] The castle is situated alongside a steep drop to the River Wye close by to a ford, therefore "this gave the site its later name, the cliff by the ford or Clifford".[8] Originally the castle was built to protect a settlement which was to be built around the same time as the castle, housing up to 200 families.[8] This settlement was the village of Clifford although it is now only a small village. 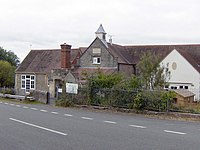 Primary School in Clifford
Clifford Primary School is a community school built in 1837 and situated in the rural area of Herefordshire, only three miles away from Hay-on-Wye as well as being close to the Black Mountains.[10] The school's Ofsted report from 2012 states that there are 71 children in attendance of the school from the age of 4 years old to 11 years old (Year R to Year 6); this report was carried out on 10 October and received a 'good' status.[11]

The school is interested in being eco-friendly, and due to a large amount of recycling and re-using the school has been given the Eco Schools Green Flag Award.[12]