Chilton Cantelo is a village in Somerset, situated on the River Yeo five miles north of Yeovil and four miles east of Ilchester in the south of the county, within its Houndsborough Hundred. The village has a population of 445. The parish also includes the village of Ashington (in the Stone Hundred. 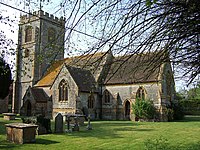 The Parish Church of St James

The first part of the name Chilton means the young nobleman's settlement, and the second is from William de Cantilupe (or Cantelo) and his descendants who held the manor between 1201 and 1350. The manor was acquired in the 18th century by the Goodford family who built Chilton Cantelo house[1] which later became the home of Chilton Cantelo School,[2] a small private boarding school which was owned and operated by the Cognita Group. In 2017 the school was purchased by the Park School Yeovil which has now relocated to the Chilton site.

Ashington Manor has pre Norman Conquest origins, and was in the overlordship of Glastonbury Abbey, but the present building is from the 15th century. The families who held the manor include de Curcelle, and from 1390 to 1901 the St. Barbes, becoming St. Barbe Syenha from 1722. In 1940 it passed to the Church Commissioners.[3]

The church in Chilton Cantelo itself, the Church of St James, is a Norman building, though with a later, 15th-century tower. It was restored in 1864–65 by Sir Arthur Blomfield. Today it is a Grade II* listed building.[4]

A gruesome curiosity is associated with the church and the manor. Theophilus Brome, who died in 1670, had his body buried in the church, however his skull was separated from the body on his instructions and is kept in a cupboard at Higher Chilton Farm.[5] According to writer Daniel Codd, who observed the skull in February 2010: "Upon being shown Theophilus' skull, I was curious to see his lower jaw was missing and that he appears at some stage to have been varnished." Codd goes on to say, "The reason for Theophilus Brome's desire that his head be hidden was very natural, given the era in which he died, and his tomb in the church is concealed beneath the church wall nearest the farm — meaning that his head and body were buried apart, but as near to each other as was possible under the circumstances."[6] Several attempts to inter the skull have resulted in terrible and unexplained noises being heard throughout the farmhouse.[7][8]

The Church of St Vincent, in Ashington, is from the 13th century.[9]