Chawton House is an Elizabethan manor house at Chawton in Hampshire. It was at one time the home of Jane Austen's brother, Edward Austen Knight.

The house today is run as a historic property and also houses the research library of The Centre for the Study of Early Women's Writing, 1600–1830, using the building's connection with the novelist, Jane Austen.

The house is a Grade II* listed building.[1]

Chawton House stands just outside Chawton village. It remained a private family home into the late 20th century. At the turn of the millennium it was purchased by a charitable trust, extensively restored, and re-opened as a research centre. The Centre, which runs study programmes in association with the nearby University of Southampton, incorporates a significant library, a collection of over 9,000 books and related manuscripts. The house is now opened to visitors, as well as library readers, for tours and during public events.

It is set in 275 acres of Hampshire countryside, and is used for conferences, filming and more recently as a venue for weddings. The present Chawton House was built in 1580, principally by John Knight. Based on a manor house owned by the Knight family since 1551, it was subsequently extended and altered about 1655 and again in the 18th and 19th centuries. The house is built of flint with stone dressings and a tiled roof. The 17th-century south front has two storeys with an attic and three gables.

John Knight served as Member of Parliament for Lymington from 1593 to 1597 and as Sheriff of Hampshire for 1609–10. The house passed down in the family until the male line failed with the death of Sir Richard Knight, after which it was devised to a relative by marriage, Richard Martin, who thereupon changed his name to Knight. It then passed to Thomas Brodnax, a relative, who did the same. His son, Thomas Knight, died childless and bequeathed the house to his distant relative Edward Austen, the elder brother of Jane Austen, who also added Knight to his name.

The estate then descended in that last Knight family until inherited in poor condition by Richard Knight in 1987, who sold it in 1992.

In 1992, a 125-year lease on the house was purchased for £1.25 million by a foundation established by Sandra Lerner and Leonard Bosack, co-founders of Cisco Systems.

Opened in 2003, it has a collection of over 9,000 books together with related original manuscripts. The library works in partnership with the University of Southampton, and provides an important resource for the university's Master of Arts course in 18th Century Study.

The gardens are open to the public, with access to a tearoom. The restoration programme for the gardens was extensive, and focused in particular on the restoration of the walled garden. Edward Knight had the idea to build a new walled garden during Jane Austen's lifetime. In 1813, she wrote to her brother Frank, "He [Knight] talks of making a new Garden; the present is a bad one & ill situated, near Mr Papillon's; — he means to have the new, at the top of the Lawn behind his own house." Knight's original walls are mostly still intact, but the glasshouses and potting sheds, had to be rebuilt. The gardens have been restored using Edward Austen Knight's original planting scheme. The central space is used for the production of vegetables, soft fruits, herbs and flowers. Chawton House is registered with the Soil Association, and is now certified as an organic producer. Everything grown in the walled garden is for use by the Library, with any surplus being sold locally in aid of the charity.

The park and gardens of Chawton House are Grade II listed on the Register of Historic Parks and Gardens.[2]

Chawton house is situated about 500 yards away from the cottage where Austen lived for the last eight years of her life. This now houses the 'Jane Austen's House Museum', which is a large 17th-century house in the centre of the village of Chawton, owned by the Jane Austen Memorial Trust since 1947 [3] and preserved in her memory. The two houses, Chawton House and Jane Austen's House, are entirely separately run charities. 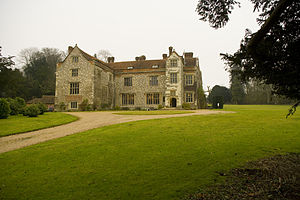 Chawton House from the driveway

Austen is known to have been a frequent visitor to what she knew as the 'Great House', and she references it a number of times in her letters. Edward Austen also loaned it to his brother, Francis Austen. Edward Austen himself resided at Godmersham Park, but his son, Edward Knight II, moved to Chawton House following his marriage, and sold Godmersham Park following his father's death.