Castlepollard is a small town in the north of Westmeath. It lies west of Lough Lene and north-east of Lough Derravaragh and Mullingar.

The name Castlepollard comes from the name of a castle or fortified manor built by the English army captain Nicholas Pollard in the early 17th century. The village's official Irish name is Baile na gCros (anglicised Ballinagross), meaning "town of the cross".[1] However, the name Cionn Toirc (anglicised Kinturk), meaning "head of the boar", has also been applied to the village.[1] The townland of Kinturk Demesne covers the southern part of the village.

Bus services link the town to Dublin, Trim, Athboy, Delvin, Abbeylara, Granard and Cavan.[2] There is also a link to Mullingar via Crookedwood on Thursdays only.[3] The nearest rail service is at Mullingar railway station, approximately 13 miles distant.

Nicholas Pollard, an English Army captain from Devonshire, arrived in Ireland in 1597 during the Nine Years' War. He fought under the Earl of Essex's command against the Gaelic Irish forces. After that campaign, Captain Pollard was settled on land in the Mayne area. Cionn Torc (Kinturk), a valley between the lakes, was granted 'in capite' by the ageing Queen Elizabeth I to Captain Pollard. He built a small castle at Rathyoung which he called Castle Pollard.

Walter Pollard, first son of Nicholas, married Ismay Nugent of Roscommon. He received a regrant of the demesne during the restoration period, following the Civil War and Cromwellian confiscations. The grant was made by charter from King Charles II, and approved by the Irish Parliament. In addition, he was granted a permit for a weekly market and a fair which was held four times annually. The Pollard family was reconfirmed in the manorial title by the edict of William and Mary. Serving as Commissioner for Supplies during the War of the Three Kingdoms, Pollard sat in the Irish Parliament, and became High Sheriff of the county in 1692. The family gradually improved the residence and the estate. They rebuilt the adjoining out buildings and developed the village of Castlepollard. They intermarried with the Dillon family of Ladyhill, the Packenhams, the Duttons, the Tuites, and other landed county families. The descendants of Nicholas Pollard lived at Kinturk into the early twentieth century.

The original village layout is preserved and now landscaped in a central triangular green. Surrounded by buildings from the Georgian period, a sculpture on the square depicts a scene from the locally centred legend of the Children of Lir. A plaque outlines the story in several languages. The setting of the legend is Lough Derravaragh. There are several ringforts on the surrounding high ground. Two ancient forts are of archaeological interest. Randoon is located in nearby Ranaghan, south west of Lough Lene, and Turgesius Island, is situated on Lough Lene. Turgesius was a Viking leader who sojourned here with a local lover while on respite from his seafaring. He held sway in Danish Dublin (Dyflin) and Shannon Viking port near Clonmacnoise.

Castlepollard has two churches which serve the Roman Catholic and Church of Ireland Christian communities. Kinturk House, the Georgian period Pollard residence, now serves as St Peter's Centre. It was purchased by the Sacred Heart Sisters from the family in 1935, who added a chapel wing. A hospital designed by T.J. Cullen (1879–1947) was built c. 1935 and was part of "an extensive hospital construction programme initiated during the first decades of the Irish Free State"[4] financed by the Irish Hospitals' Sweepstake. The sisters operated a Magdalen Asylum there for many years; the property was sold to Midlands Health Board in 1971.[5]

In the early nineteenth century, the main village and the Pollard family properties underwent a reconstruction program. The Kinturk Desmane residence and the adjacent town buildings were rebuilt in the Georgian style of the period. Some common lands were enclosed. A new Church of Ireland building was erected in the Square, along with the Market house[6] Located on the west side of the green, this was the village's major public building and landmark. The quarterly Court of Petty Sessions convened here.

During the War of Independence the IRA burned the RIC barracks located on the Mullingar Road. The RIC then moved to the courthouse. In 1921, the IRA began a wave of burnings which targeted government offices throughout Ireland. This was a concerted effort to cripple the UK civil service in its day-to-day administration of the country. The Market House was also torched. Two sitting magistrates were kidnapped by the IRA on their way to the court. The men were held hostage locally, reportedly in a cow byre on the Hill of Moal. They were later released unharmed after forty-eight hours, and the village was spared reprisals. The Market House was rebuilt in 1926, and serves as the Town Fire Station.

Recent additions to the built environment include multiple housing estates, the Area Office of the Westmeath County Council,[7] and the Castlepollard Community College's new school building (2004),[8] both on the Mullingar Road.

On 23 May 1831 members of the paramilitary Royal Irish Constabulary force arrested a man following a fight at the town's fair.[9] The crowd surrounded them until they released the man. At approximately 5pm that day, members of the same force returned, this time armed with muskets.[9] These RIC members were then allegedly jeered by the crowd. In response, they lined up and fired shots.[9] By the time they had finished 13 people lay dead, and many others were injured.[9] The names of the dead were: Patrick Dignam, Mary Kiernan, John Slevin, Patrick McCormack, Brian Mahon, Tomas Kiernan, Patrick McDermott, Patrick McDonagh, Mary Neill, James Fagan, Patrick Keegan, Patrick Ledwich and Peggy Leary. 19 police officers were sent to Mullingar jail but at their hearing in Mullingar in July 1831 all 19 were discharged without conviction.[9]

This incident may have been related to the enforcement of collection orders during the Tithe War (1831–1836). Spasmodic violence broke out around this time (particularly in Kilkenny, Wexford, and Cork) when the police entered local fairgrounds to enforce seizure orders on cattle for non-payment of tithes. Order was finally restored by rescinding seizure orders in 1836. The subsequent revision of the Tithe Act commuted the levy. The Church of Ireland was disestablished by the Gladstone government in 1869, and the tithe was abolished.

Mergon International, a manufacturer of moulded parts, is one of the main businesses in the town. The town has number of retail outlets, serving a hinterland covering parts of North Westmeath. This includes filling stations, banks, a post office, council buildings, primary and secondary schools, a number of grocery/newsagent shops, hairdressers, beauty salon's, drapery stores, furniture stores, pharmacies and a hardware store. Castlepollard also has number of pubs and a hotel.

Hurling is the major sport in the area. Castlepollard is home to the Castlepollard hurling team, who have won the Westmeath Senior Championship on thirteen occasions. 'Pollard are arch-rivals of neighbouring Lough Lene Gaels of Collinstown.

Castlepollard Celtic Football Club, founded in 2004, caters for underage association football in the area with teams ranging from Under 7's to Under 16's for boys and girls. In 2013, the club introduced a senior team to the Combined Counties Football League. 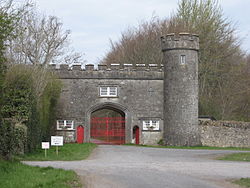 A mile west of Castlepollard on the Granard Road (Pakenham Hall Street) is Tullynally Castle, seat of the Pakenham family, later the Earls of Longford. Also known as Pakenham Hall, the original 17th-century fortified house (c. 1655) was remodelled first as a Georgian mansion in the 1730s, then as a large Gothic Revival castle.[10] Kitty Pakenham (1773–1831) was a friend of novelist Maria Edgeworth and married Arthur Wellesley, 1st Duke of Wellington.

The Irish National Inventory of Architectural Heritage describes Tullynally as a "magnificent sprawling castle, with a picturesque skyline of turrets, pinnacles, battlements and tall Tudoresque chimney stacks" and "a hugely significant structure of national importance". The castle was worked on by several well-known architects operating in Ireland during the early-to-mid nineteenth-century, including Francis Johnston, James Shiel and Sir Richard Morrison."

A number of other structures are located on the grounds, including the gate lodge which fronts the Granard Road facing Castlepollard. The two-storey limestone building was designed by Shiel (a noted architect of his day and former clerk of Francis Johnston) c. 1820 whilst making renovations on the main house. An integral Tudor Gothic-arched carriage arch to the centre of the main body of the building and a single-bay three-storey tower on polygonal-plan (with slight base batter) attached to the north end of the main façade (east) form "a pleasing vista on a main road leading out of Castlepollard from the west and marks the start of a long tree-lined avenue to Tullynally Castle itself".[11] It is currently in use as private residence.

The gardens, like the castle, are on a large scale, covering nearly 30 acres. Terraced lawns around the castle overlook 18th-century parkland. The adjoining woodland gardens and walled gardens date largely from the early 19th century and encompass a grotto of eroded limestone from nearby Lough Derravaragh and two ornamental lakes. The present owners have added a Chinese garden, complete with pagoda and a Tibetan garden of waterfalls and streams; and a local sculptor has made woodcarvings in existing roots and trees. The walled gardens have flower borders and an avenue of 200-year-old Irish yews.[12] The gardens are open to the public in the spring and summer.[13]

The current Earl of Longford, Thomas Pakenham, is an historian and arborist. He is the chairman of the Irish Tree Society.