Castle Sinclair Girnigoe is a castle standing in ruin about 3 miles north of Wick on the east coast of Caithness. It is considered to be one of the earliest seats of Clan Sinclair.

In its earliest incarnation, Castle Sinclair Girnigoe was known only as Castle Girnigoe. It was built by William Sinclair, 2nd Earl of Caithness, probably at some time between 1476 and 1496, but before his death at the Battle of Flodden in Northumberland in 1513.

There are some indications that the castle was built upon the foundations of an earlier fortalice.[1]

In 1577, George Sinclair, the 4th Earl of Caithness imprisoned his own son John, Master of Caithness in Castle Sinclair Girnigoe, on suspicion of rebelling against his rule. He was held there for seven years, after which his father fed him a diet of salted beef, with nothing to drink, so that he eventually died insane from thirst.[2]

The castle was extended in 1606, with new structures consisting of a gatehouse and other buildings surrounded by a curtain wall, these connected to rest of the castle by a drawbridge over a rock-cut ravine. At this time, the Earl of Caithness obtained official permission, in an Act of Parliament, to change the name from Castle Girnigoe to Castle Sinclair. However, both names remained in use. 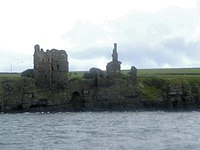 Girnigoe was an adapted 5 story L-plan crow-stepped gabled tower house, which sat upon a rocky promontory jutting out into Sinclair Bay. This tower was adjoined to various outbuildings within a surrounding wall which encompassed the entire promontory. There is some evidence to suggest that the tower house of Girnigoe is a 17th-century addition. Girnigoe has a number of special architectural details, including a small secret chamber in the vaulted ceiling of the kitchen, a rock-cut stairway down to the sea, and a well (now filled-in) in the lowest level of the tower.

In 1690, George Sinclair of Keiss once again besieged the castle, but this time destroyed it with heavy cannon fire, though recent investigations seem to discount the cannon fire story. Although he reclaimed the title of Earl of Caithness for Clan Sinclair, Castle Sinclair Girnigoe was now a ruined shell. Until recently, it had been allowed to fall into decay.

Recently, the Clan Sinclair Trust has begun restoration work on the Castle, in an attempt to preserve the archeological and historical importance of the structure. Once restored, it will be one of the few castles open to the public which are accessible to handicapped people.