Burnswark is a prominent Iron Age hill fort in Annandale, in Dumfriesshire. It stands to the north of another hill fort of possibly similar age named Birrens, in the Parish of Hoddom.

This fort has been suggested as the oppidum, the tribal capital fortress, for the Novantae tribe. It stands at a strategic position, looking down over Annandale, the main north-south route through the Southern Uplands.

Each side of the hill, to the south-east and the north-west, are the remains of Roman camps. The purpose of the camps was long debated, and the suggestion which prevailed for many years is that these ill-made forts were marching camps or training camps, but more recent archaeology has uncovered substantial Roman ordnance on Burnswark Hill, demonstrating a bloody assault on the hill fort in the second Century AD.

The name of the fort, 'Burnswark', has tentatively identified it with the location which Simeon of Durham calls Brunnanwerc and in most sources Brunanburh, where in 937 King Athelstan defeated an alliance of the kings of Scotland, Strathclyde and Dublin to defend the newly won unity of England and reassert Athelstan's position as the overking of all Britain. However no archaeological evidence has been uncovered of a tenth century battle here and so the location of Brunanburh must remain a mystery. 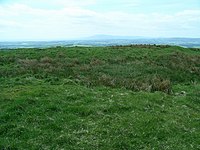 Earthworks on the summit

The table-like summit of the hill, the earthworks of a large native hill fort are still to be found, encompassing 17 acres. The date of the fort cannot be determined with any degree of accuracy. It is known that it was occupied at least until the second century AD. At some time in the middle of that century, Burnswark was attacked and presumably overrun by the Romans.

On the north and south slopes of the hill are the earthworks of two Roman camps incorporating artillery platforms. The presence of two Roman camps and the nature and volume of the ordnance found on Burnswark Hill and in the fort is evidence of the importance of the fort and the strength in which it was held.

During the excavations at Birrens just to the south, the head of a ballista bolt was found typical of the mid-second century, suggesting that Birrens was attacked at the same time.

Metal detectorists began finding lead-shot around the fort, followed up by archaeologists, who found these slingshot bullets in such volume as would typify an intensive bombardment. Bolts from a Roman ballista were found also. Further, the lead bullets had neat holes driled in them – this was a mystery until ballistic tests showed that bullets so drilled create a screaming noise as they pass through the air – bound to terrify the tribesmen manning the ramparts.[1][2]

At Burnswark, archaeologistrs have found a greater number and variety of Roman projectiles than have been found on any native site anywhere else in Britain. Even Europe has no equivalent. Even before the 2016 excavations, 130 lead sling-bullets, nine trilobate iron arrowheads, and eleven carved sandstone ballista-balls had been identified.[2]

The attack might have been carried out to secure the new frontier on Hadrian's Wall in the 120s, or part of the invasion ordered by the new Emperor Antoninus Pius in around 140, which pushed the frontier to the Clyde-Forth line (and established the Antonine Wall). The latter invasion was led by Lollius Urbicus, who had made short, brutal work of rebels in Judæa, but his presence at Burnswark can be no more than speculation.

Over the years the arguments in favour of both training and actual warfare have steadily multiplied. As is so often the case, many observations have proven susceptible to conflicting readings. 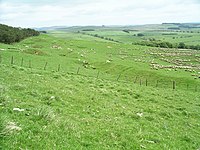 The two Roman camps on Burnswark Hill stand on opposite slopes, and both feature design oddities. The northern one displays an unusually elongated form, while the south camp is more conventional in shape, but was furnished with three wide gateways facing up the hill. Each of these gateways is shielded by a large tumulus-like earthwork. This configuration of Roman camps straddling a hillfort is unique in Britain. The unique design of the camps has been attributed to either clumsy practice work or the demands of battle conditions. When the theory held sway that the camps where training camps then they were attributed to sloppy work. As the explanation of them as fighting camps has grown in acceptance, they have been seen as camps hastily thrown up in the face of battle.

The south-eastern Roman camp measures around 900 feet by 670 feet, with three entrances on the north, each guarded by a roughly circular mound 60 feet in diameter at base. These tumuli are known locally as 'The Three Brethren', and it has been theorised that they were artillery platforms.[3] The other sides of the camp have central gateways, guarded by normal traverses. A fortlet on the north corner of the south-eastern camp measures 100 feet north to south by 70 feet, being defended by a ditch and double rampart.

The north-western camp measures about 1,000 feet by 400 feet and has six gateways. It is incomplete, but it has the same character as the south-eastern camp.

Finds here range from flint flakes and winged and flanged axes to Roman glass and paste trinkets, an iron spearhead, coins (1 Domitian, 1 Nero, 1 Vespasian, and 2 Trajan) potsherds, also quantities of lead glandes of the kind not used after the end of the 1st century AD.