Burnmouth is a small fishing village beside the A1 road on the east coast of Berwickshire. It is the first village in Scotland to the traveller coming north on the A1.

The village is in the Parish of Ayton.

Burnmouth lies at the point where a burn slices through the high cliffs lining this coast en route to the sea. There may have been a mill here in the Middle Ages, but little else until a fishing harbour was built in the 1830s, later extended in 1879 and 1959. The East Coast Main Line railway passes along the top of the cliff here, and Burnmouth had a railway station from 1846 to 1962. The Berwickshire Coastal Path is nearby. 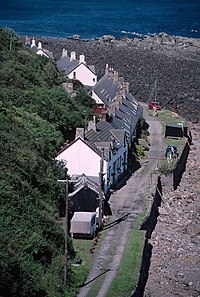 Burnmouth has a small church sited halfway down the Brae (the road which ascends the cliff between Lower and Upper Burnmouth). Until 2005, the village had a small primary school. Burnmouth had two pubs - The Flemington Inn and The Gulls Nest (now called the First and Last) - which were sited next to each other adjacent to the A1 road. The Flemington Inn had signs on the north and south gables proclaiming to passing motorists that that pub was "The last inn Scotland" and "The first inn Scotland". In February 2006 the Flemington was gutted by fire and the building was later demolished.

Burnmouth hosts an annual bike race, known as the "Brae Race" which takes place every May. The course consists of the steep road which ascends the cliff from lower to upper Burnmouth.