Bunratty Castle is a large 15th-century tower house in County Clare. It stands in the centre of Bunratty village, by the N18 road between Limerick and Ennis, near Shannon Town and its airport. The castle and the adjoining folk park are run by Shannon Heritage as tourist attractions.

The name Bunratty, Bun Raite (or possibly, Bun na Raite) in Irish, means "river basin" of the 'Ratty' river.[1] This river, alongside the castle, flows into the nearby Shannon estuary.

The first recorded settlement at the site may have been a Norsemen settlement/trading camp reported in the Annals of the Four Masters to have been destroyed by Brian Boru in 977. According to local tradition, such a camp was located on a rise south-west of the current castle. However, since no actual remains of this settlement have yet been found, its exact location is unknown and its existence is not proven.[2]

Around 1250, King Henry III of England granted the cantred or district of Tradraighe (or Tradree) to Robert De Muscegros, who in 1251 cut down around 200 trees in the King's wood at Cratloe. These may have been used to construct a motte and bailey castle, which would have been the first castle at Bunratty, but again the exact position of this is unknown. A later reference in the state papers, dating to 1253 gives de Muscegros the right to hold markets and an annual fair at Bunratty. It has thus been assumed that the site was the centre of early Norman control in south-eastern Clare. Early 19th-century scholars put the structure to the north-west of the current castle. However, when a hotel was constructed there in 1959, John Hunt excavated the area and thought the remains to be that of a gun emplacement from the Confederate Wars.[1][2] 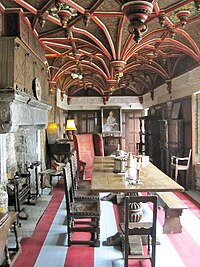 The lands of Tradree were later handed back to (or taken back by) King Henry III and in 1276 the King granted them to Thomas De Clare, a descendant of Richard de Clare, 2nd Earl of Pembroke, known as Strongbow. De Clare built the first stone structure on the site (the second castle). This castle was occupied from around 1278 to 1318 and consisted of a large single stone tower with lime white walls. It stood close to the river, on or near the site of the present Bunratty Castle. In the late 13th century, Bunrattty had about 1,000 inhabitants.

The castle was attacked several times by the O'Briens (or O'Brians) and their allies. In 1284, while De Clare was away in England, the site was captured and destroyed. On his return, in 1287, De Clare had the site rebuilt and a fosse 140 yards long built around it. The castle was again attacked but it did not fall until 1318. In that year a major battle, the Battle of Dysert O'Dea, was fought at Dysert O'Dea as part of the Irish Bruce Wars, in which both Thomas De Clare and his son Richard were killed. Lady De Clare, on learning this, fled from Bunratty to Limerick after burning castle and town. The De Clare family never returned to the area and the remains of the castle eventually collapsed. As the stones were likely used for other local construction works, no traces remain of this second castle.[2]

In the 14th century, Limerick was an important port for the Crown. To guard access via the Shannon estuary against attacks from the Irish, the site was once again occupied. In 1353, Sir Thomas de Rokeby led an English army to conquer the MacNamaras and MacCarthys. A new castle (the third) was built at Bunratty, but once again, its exact location is unknown. Local tradition holds that it stood at the site where the Bunratty Castle Hotel was later constructed. However, the new structure was hardly finished before being captured by the Irish. Documents show that in 1355, King Edward III of England released Thomas Fitzjohn Fitzmaurice from prison in Limerick. He had been charged with letting the castle fall into the hands of Murtough O’Brien whilst serving as a Governor of Bunratty.[2]

The fourth castle, the present structure, was built by the MacNamara family after around 1425. Its builder may have been one Maccon Sioda MacNamara, chieftain of Clann Cuilein (i.e. the MacNamaras). He died before the castle was completed which happened under his son Sean Finn (died in 1467). At around 1500, Bunratty Castle came into the hands of the O'Briens (or O'Brians), the most powerful clan in Munster and later Earls of Thomond. They expanded the site and eventually made it their chief seat, moving it there from Ennis.[2]

In 1558, the castle—now noted as one of the principal strongholds of Thomond—was taken by Thomas Radclyffe, the Lord-Lieutenant of Ireland from Donal O'Brien of Duagh, last King of Thomond (died 1579), and given to Donal's nephew, Connor O'Brien. Donogh O'Brien, 4th Earl of Thomond, Conor's son, may have been the one to move the seat of the family from Clonroad (Ennis) to Bunratty. He made various improvements to the castle including putting a new lead roof on it.[1]

During the Confederate Wars set off by the Irish Rebellion of 1641, Lord Forbes, commanding forces of the English Long Parliament, was allowed by the then Lord Barnabas O'Brien to occupy Bunratty in 1646. Barnabas did not want to commit to either side in the struggle, playing off royalists, rebels and roundheads against each other. He left for England, where he joined King Charles. Defence of the castle, whose position allowed those holding it to blockade maritime access to Limerick (held by the Confederates) and the river Shannon, was in the hands of Rear-Admiral Penn (the father of William Penn, the prominent Quaker and founder of Pennsylvania). After a long siege, the Confederates took the castle. Penn surrendered but was allowed to sail away to Kinsale.[1]

Barnabas O'Brien died in 1657, but had apparently leased out the castle to one "John Cooper", possibly the same person married to Máire ní Mahon of Leamaneh Castle, widow of another O'Brien, Conor (died 1651).[1] Bunratty Castle remained property of the O'Briens and in the 1680s the castle was still the principal seat of the Earls of Thomond. In 1712, Henry, the 8th and last Earl of Thomond (1688–1741) sold Bunratty Castle and 472 acres of land to Thomas Amory for £225 and an annual rent of £120. Amory in turn sold the castle to Thomas Studdert who moved in around 1720.[3]

The Studdert family left the castle (allowing it to fall into disrepair), to reside in the more comfortable and modern adjacent "Bunratty House" they had built in 1804.[3][4] The reasons for the move are bound up in family arguments over the eldest son marrying his first cousin.[citation needed]

For some time in the mid-19th century, the castle was used as a barracks by the Royal Irish Constabulary.[5] In 1894, Bunratty was once again used by the Studdert family, as the seat of Captain Richard Studdert.[5] In the late 19th century, the roof of the Great Hall collapsed.[1]

In 1956, the castle was purchased and restored by Standish Robert Gage Prendergast Vereker M.C., 7th Viscount Gort, with assistance from the Office of Public Works.[3] He reroofed the castle and saved it from ruin. The castle was opened to the public in 1960, sporting furniture, tapestries and works of art dating to around 1600.[2][3] 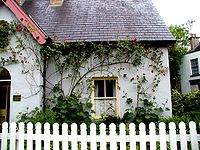 Rose Cottage at the Folk Park

Today, the castle is a major tourist attraction, along with "Bunratty Folk Park". Both the castle and Bunratty House are open to the public. The castle is famous for its mediæval banquets, offered since 1963, at which the "Bunratty Castle Entertainers" perform today. "Bunratty Folk Park" is an open-air museum featuring around 30 buildings, including the Ardcroney Church Of Ireland church, which moved here and reopened in 1998.