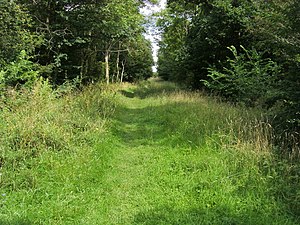 Brampton Wood is a woodland in Huntingdonshire near Brampton. It is off the A14, four miles from the county town, Huntingdon.

The woodland is an SSSI covering 326 acres and is one of the largest remaining blocks of ancient woodland in the county. It is in the care of the local Wildlife Trust.[1]

Situated on chalky boulder clay, it is of the wet ash-maple woodland type which is nationally restricted to heavy soils in lowland parts of Britain. The rides support a rich neutral grassland flora, representing additional plant communities which are now uncommon in the county. The variety of habitat makes this a valuable site for invertebrates for which it is additionally noted.

Brampton Wood has experienced a period of plantation forestry. Scots pine, Corsican pine and Norway spruce dominate about one fifth of the woodland. These plantations were introduced in the 1950s by the Forestry Commission, shortly after they took over the management of the wood on behalf of the Ministry of Defence. The plantations were planted in rows for ease of exploitation. When the MoD sold the wood in 1992 a public appeal enabled the Wildlife Trust to buy it, since when the woods and rides have been managed for wildlife conservation.[2]

Coppicing is used to encourage growth and indefinite succession young stems. This provides ideal conditions for many woodland flowers as well as birds and invertebrates. The many Muntjac deer in Brampton Wood can graze the young shoots and prevent regeneration unless controls are put in place.[2] The exceeded carrying capacity of deer means security fencing surrounding the coppiced trees must be installed to ensure that the new growth is not eaten. Coppiced stumps may be covered in brushwood to deter deer from eating new growth. The medieval practice of pollarding could be introduced.

Approximately 280 species of fern, conifer, flowering plant and tree have been recorded in Brampton Wood. These include species such as Dog's Mercury, bluebell, primrose and violets. Also notable to the woodland are the ‘major oaks’ which stand at the entrance to the main ride.[2]

Brampton Wood hosts three examples of Wild Service Tree. The berries of this tree — known as 'chequers' were once widely used to flavour beer in Great Britain (before hops). A limited edition beer 'Chequered Past' was produced by The Son of Sid Brewery in 2010.

Brampton Wood has thriving colonies of Black Hairstreak, one of Britain’s rarest butterflies. The butterfly survives due to careful management of the rides. This involves trimming the scrub at times in the year when the population can cope. Brown Argus, White Admiral and Purple Hairstreak can also be spotted at Brampton Wood.[2]

Also currently thriving in Brampton Wood is the Hazel Dormouse population. The species was reintroduced in 1992 and live in low densities across the wood. They thrive on hazel, bramble and a variety of flowers.[2]

The muntjacs in Brampton Wood have well exceeded the forest’s carrying capacity of thirteen animals, yet over a hundred live and breed in the area. Fencing has recently been installed on the boundaries of the forest to prevent the animals spoiling farmers' crops on nearby fields.

The deer also cause difficulties through the consumption of recently coppiced trees and the scratching of bark, known as 'fraying'. They do this to mark their territory.