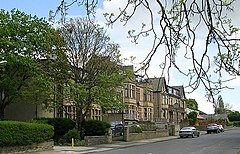 Bradford Moor is a suburb of Bradford built up on what was once the moorland to the east of the town.

The main road through the middle, the B6381, is the direct route between the centres of Bradford and Leeds, though now a bypass roads loops south.

The moor once spread from near the centre of Bradford, where the suburb now stands. This moorland was urbanised relatively late in the city's history, but sundered from its wild roots, it now bears an inner-city character.