Bowmore is a village on the isle of Islay, Argyllshire and serves as administrative capital of the island. It gives its name to the noted Bowmore distillery producing Bowmore Single Malt, a single-malt scotch whisky. The name is from the Gaelic, Bogh Mòr, meaning 'great sea reef'. 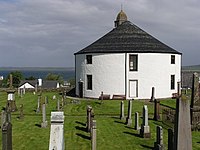 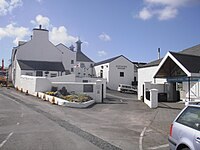 Bowmore is a planned village with wide streets on a grid-iron pattern. Daniel Campbell the Younger initiated the construction of the village in 1770, just after the completion of the Kilarrow Parish Church, which was built in a circular shape to prevent the devil from hiding in a corner.

The Bowmore distillery came in operation at some time before 1816 and is situated on the shores of Loch Indaal and next to an old warehouse which is converted to a swimming pool, known locally as the MacTaggart Centre. The waste heat from the distillery is partially used to heat the water of the swimming pool.

There was a RAF seaplane base at Bowmore during Word War II. Short Sunderland and PBY Catalina flying boats operated from Loch Indaal. Some of the wartime film Coastal Command was filmed in Bowmore and it features a shot of a Sunderland flying low over the main street of Bowmore and over Kilarrow Parish Church.

Bowmore has several hotels, restaurants, shops, a hospital, a high school and is home to the Ìleach newspaper, community newspaper of the year 2006. Bowmore is also host to Ionad Chaluim Chille Ìle (the Columba Centre), a cultural centre and college founded with the aim of promoting Gaelic language and heritage on the Island.