Blanchland is a pretty village in Northumberland, on the County Durham boundary.

Set beside the river in a wooded section of the Derwent valley, Blanchland is an attractive small village in the North Pennines Area of Outstanding Natural Beauty.

Blanchland was formed out of the mediæval Blanchland Abbey property by Nathaniel Crew, 3rd Baron Crew, the Bishop of Durham, 1674-1722. It is a conservation village, largely built of stone from the remains of the 12th-century Abbey. It has picturesque houses, set against a backdrop of deep woods and open moors. Nearby the Derwent Reservoir provides facilities for sailing and fishing.

The Lord Crewe Arms Hotel has a vast fireplace where 'General' Tom Forster hid during the Jacobite rising of 1715. W. H. Auden stayed at the Lord Crewe Arms with fellow student Gabriel Carritt at Easter 1930, and later remarked that no place held sweeter memories. Blanchland may have been the model for the village in which was set the opening and closing scenes of Auden and Isherwood's play The Dog Beneath the Skin (1935). Another celebrated poet Philip Larkin used to dine at the hotel when staying with Monica Jones in Haydon Bridge. In July 1969, Benjamin Britten and Peter Pears stayed at the Inn.

With a population of 140, its unspoilt qualities make it a frequent setting for period films, set in the 18th century, such as those based on the novels of Catherine Cookson. 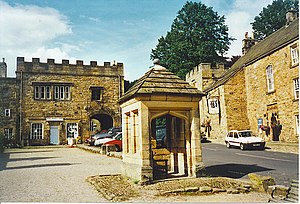 This Northumberland article is a stub: help to improve Wikishire by building it up.
Retrieved from "https://wikishire.co.uk/w/index.php?title=Blanchland&oldid=35111"
Categories: