Blaby is a village and parish in central Leicestershire, some five miles south of Leicester city centre. It had a recorded population of 6,194 at the 2011 census. Its proximity to the city has led to its being classified by planning officials as part of the 'Leicester Urban Area'.

The name 'Blaby' probably came Old Norse Blábýr meaning "Blár's farmstead (or village)'. There seems to have been a dense patch of Norse / Danish settlement in Leicestershire. However some records in the Blaby Library indicate the origin of the village's name was from the first vicar. 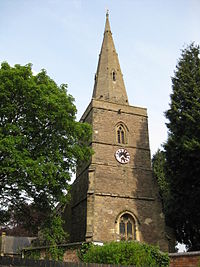 All Saints, the parish church

While there are few buildings of outstanding historical or architectural interest, old Blaby is a conservation area. It contains some ancient and picturesque dwellings and has a charming 'olde worlde' feel. Old Blaby also contains The Baker's Arms, a thatched public house that dates back to 1484. The other public houses to be found in Blaby are The Fox & Tiger, The Bulls Head, The Black Horse and The Tom Thumb. The Egyptian Queen has now been demolished. One of the two old schools in Blaby is Park (Parkwood) House; the other is in the surrounding area near the parish church.

To the south of the Bakers Arms stands Bouskell Park, with a 19th-century ice house and car parking. There are also Northfield Park, used for football, cricket, fetes and fairs, and Oakfield Park, located off Hospital Lane. Both have been enrolled as Queen Elizabeth II Fields.

Most shops and amenities stand on the old A426 road between Leicester to the north and Lutterworth to the south. Fosse Park shopping centre and the M1 motorway and M69 motorway are just a few miles away.

There was a railway station here, on the Birmingham to Peterborough Line, but it closed in 1968.

The "Blaby Special" heirloom tomato variety originates from the Shoults' Tomato Farm, which was located in Blaby from circa 1908 until 1948: the variety was thought to be extinct but was revived from a seed bank in 2005.[1]