Bidean nam Bian is a mountain rising up to the south of Glen Coe in Argyllshire, of which county it is the highest point. It is a complex mountain, with many ridges and subsidiary peaks, one of which, Stob Coire Sgreamhach, is classified as a separate Munro.

The most noticeable features of Bidean nam Bian are the famous Three Sisters of Glen Coe, three steeply-sided ridges that extend north into the Glen. Two of the sisters, Gearr Aonach (Short Ridge) and Aonach Dubh (Black Ridge) converge at Stob Coire nan Lochan, a 3,658-foot) subsidiary peak of Bidean nam Bian that lies less than a mile to the northeast of the actual summit. The final, most easterly sister, Beinn Fhada (Long Hill), joins the Bidean nam Bian massif at the summit of Stob Coire Sgreamhach.

Beinn Fhada is separated from Gearr Aonach by a glen known as Coire Gabhail, which means Valley of Capture, though the glen is more normally known as the Hidden or Lost Valley. Either name may be considered appropriate since it is believed that in former times the valley was used by members of Clan Macdonald to hide stolen Clan Campbell cattle. The glen is ideal for this purpose since it is blocked by a glacial landslip, and from Glen Coe appears as a narrow gorge. In fact, once past the landslip the floor of the glen is wide and flat – ideal for cattle. The path from Glen Coe through the gorge into Coire Gabhail is a popular short walk 2½ miles in total), though it is rough in places. 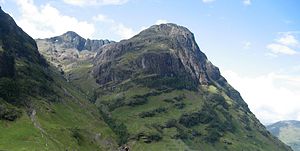 There are several routes up Bidean nam Bian. One may continue from the hidden valley, reaching the main ridge by means of a zig-zag path that climbs through scree at the head of the corrie. From here one may also climb Stob Coire Sgreamhach which lies only about 500 yards to the southeast.

All of the above routes start from Glen Coe, and may thus be combined to allow a traverse of the mountain. Due to the accessibility of Bidean from the north, routes on the southern side are used much less frequently.