Betws is a small village on the River Amman in Carmarthenshire, some 15 miles north of Swansea, Glamorgan; it is part of the ecclesiastical parish of Betws and Ammanford. The nearby mountain, at the western end of the Black Mountain, is named after the village, and has a large area of common land.

The name 'Betws' is generally thought to be derived from the Anglo-Saxon 'bed-hus' - a house of prayer, or oratory, and means "chapel" in the Welsh language. Until the 19th century, when Ammanford developed extensively, Betws was the largest village in the area.[1] 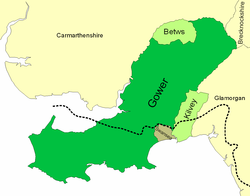 Map of the Lordship of Gower, showing Betws (later detached), Kilvey (later added), and the Town and Franchise of Swansea. The language boundary - with English to the south - is shown as a dotted line.

Until the 13th century,[2] Betws was part of Gower, which is now part of the county of Glamorgan but the old commote border of the rivers Amman and Loughor moved south and Betws has since the 1535 been part of Carmarthenshire.[3]

Until 1817, when a road was built along the Amman valley, Betws was only accessible by roads crossing the mountain from Neath and Swansea. This inaccessibility is commemorated in a local saying, which refers to the division between Betws a'r Byd (Betws and the world). There was a sign on the Amman bridge to this effect: Betws this way, the rest of the world that way.

The people of Betws like to make the distinction between themselves and those over the river in Ammanford.

The land for Betws Park was given to Ammanford district Council by Arthur Rice, 6th Baron Dynevor in 1903, but the council used it as a rubbish dump until the early 1930s. After this, it was properly developed by local volunteers as a park with tennis courts.[1] On 23 June 2007, a new 'Memorial and Sensory Garden' was opened in the park. 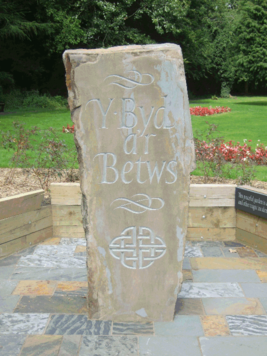 Memorial stone in Betws park. The plaque on the right reads "This peaceful garden is a living tribute to those who lost their lives in wars, mining accidents and other tragic incidents. THEIR MEMORY IS OUR HERITAGE."

Betws Park Workshops are a collection of industrial units rented by various businesses. The workshops were opened in 1991, having previously been a screw manufacturing factory (1970-1981) and a lightbulb factory (1983-1986).[1]

The parish church in the village is dedicated to St David. It dates to the 14th century but was renovated in 1872.[5][6]

Ammanford Association Football Club have a ground at Rice Street, Betws, which is currently being reconstructed.

A wide variety of birds can be seen around Betws: Red kites, ravens, buzzards, kestrels and sparrowhawks on the mountain; Kingfishers, dippers and cormorants on the river; Jays and woodpeckers in the woods.