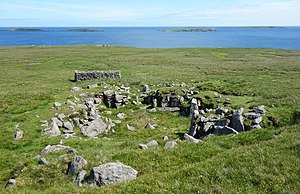 Benie Hoose, also Bunyie Hoose, is a Neolithic site in the parish of Nesting, north-eastern Whalsay, a remote island of Shetland.

Benie Hoose and the neighbouring Standing Stones of Yoxie demonstrate characteristics of 'paired houses'.[1] The close proximity of Benie Hoose to Yoxie suggests a connection between them, though since the purpose of the standing stones, if there was any, is unknown, then any suggestion of a purposive connection of the habitation at Benie and the stones is in the realm of speculation and romance.

The site is approximately 100 yards north-west of the Standing Stones of Yoxie, and about 150 yards southeast of the Pettigarths Field Cairns.[5][6]

The Benie Hoose is laid out in the form of a figure of eight, to the southeast of Pettigarths Field, about 30m from the lower hill slopes of Gamla Vord. The front elevation is curved and with a courtyard in horn shape. It has no similarity with other dwelling units (70 units seen here) but has identity with the Yoxie monument. The main block is 80 feet in length and 40 feet in width while the forecourt is 32 feet wide. The main block is set towards the hill. The walls are made of dry stones of 13 feet thickness.

The large number of tools and querns found here attests to the domestic nature of the Benie Hoose. There is a 13 foot passage leading from the entrance.

The complex has an elaborate drainage system which ensured that the interior remained dry. The floor of the chamber had stone flooring.

The forecourt is D-shaped and is conjectured as an animal pen. No stone made furniture was found which has led to the conclusion that the furniture must have been made of wood.[7][8]

Calder unearthed an unusual quantity of tools and querns, indicating that there was a dwelling here, possibly a vicary, as 'Benie' is believed to be a local term for 'Bone House' or graveyard or a transliteration of the Old Norse 'Boenhus', which means 'a house of prayer' or chapel.[5] Artefacts include 33 trough querns, and 1,800 implements such as axes, hammer stones, hammer pounders, picks, pot lids, pot shards, steatite pot handle, and a steatite spindle whorl.[4]

Based on architectural details and its location with respect to Yoxie, a nearby site, it has been conjectured that the Benie Hoose was the residence of the priests who were associated with performing worship at the temple at Yoxie,[8] if Yoxie was a religious site.

Earlier archaeological explorations carried out at about 150 yards north west of Benie House during 1936 and 1938 have revealed two Pettigarths Field Cairns; the first one is on the south of the site which is square in shape measuring 20 feet with a circular entry of 6 feet, the other cairn is a smaller circular one of 15 feet in diameter with cist in the shape of a rectangle. Both are inferred as tombs of the Late Stone and Early Bronze Ages.[6][8]