Belgrave Hall is a Queen Anne-style Grade II* listed country house in Leicestershire, on the northern edge of the cityscape of Leicester.[1] Once a prosperous merchant's country residence, it is today used as a museum, owned by the city council.

Belgrave Hall was built as a family home for Edmund and Ann Cradock in 1709 in the midst of two acres of walled gardens in Belgrave, Leicester. After only 2 years its completion, both had died, and it was then owned by the Simons family for 45 years, the Vann family for 78 years, (during which time they also built the nearby Belgrave House[2]), the Ellis family for 76 years, and Thomas Morley for 13 years. In 1936 it was bought by Leicester City Council, and has been a museum ever since. 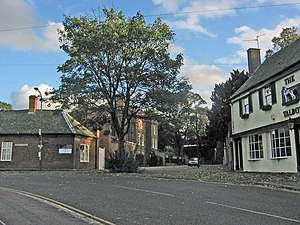 Belgrave, with Hall and church in the distance

Belgrave Hall was built as a substantial family home between 1709 and 1713 by Edmund Cradock, a Leicester hosiery merchant, on a site adjacent to Belgrave Church. At the time Belgrave was a small village three miles from Leicester, between the roads to Loughborough and Lincoln, and Belgrave Hall set a trend for wealthy businessmen to build themselves out-of-town houses in the area.[2] The house, fronting onto Church Road, is of three-storeys, built in an unadorned classical style, from blue and red bricks, laid in Flemish bond, creating a chequered pattern.[3] There are lead rainwater heads with the Cradock family crest, some of which have a 1709 date and others with 1713.[4] This unusually long construction period, along with brickwork and ground-plan irregularities on the south side, may imply a re-design or halt to construction while building was underway.[4] The road frontage has imposing wrought iron gates to a recessed doorway, and a brick parapet which hides the three hipped gables of the roof, creating a very rectangular facade.[5] Edmund Cradock (cousin of Edmund Cradock of Knighton,[6] and nephew of Henry Hastings of Belgrave Old Hall[7]) and his wife Ann, both died shortly after the house was completed. Initially the Hall was held in trust for their children, but was sold in 1721 to John and Helen Simons.[7]

John Simons had previously inherited the land opposite the hall, which at that time was orchards and paddocks[7] running down to the River Soar.[4] John and Helen had two sons, and when, in 1750, John died, he had land and property elsewhere to leave to his elder son, Revd Nicholas Simons. The younger son, Nicholas, inherited the now extensive Belgrave Hall estate.[7] However, within 7 years Nicholas had mortgaged the property, and in 1757 he moved to Gumley, and let out Belgrave Hall to an old family friend, Sarah Boothby. In 1766 Sarah died, and, unable to make their mortgage repayments, Nicholas and his wife Elizabeth appeared in court. The result was that the Hall and lands were put up for sale, and bought by William Southwell, a linen draper from Nottingham, who along with his brother-in-law, William Vann, based their framework knitting business at the Hall, utilising the substantial outhouses for warehousing and office space.[7]

The Vann Family: Hall and House

In 1767 William Southwell died, leaving Belgrave Hall to two of the Vann sons, William and Richard,[7] who with their younger brother James, lived in the Hall, and were partners in the Belgrave-based hosiery business.[8] William, who in 1785 went on to become High Sheriff of Leicestershire, built himself a new house in 1776, named Belgrave House, on the other side of the road from the hall. It was built in a 'sleek, classical style',[9] and is also a grade II* listed building.[10] The gardens on that side of Church Road were divided between the two properties Richard and James continued in the Hall, and when Richard died unmarried in 1796, The Hall and his half of the estate passed to James, who had the previous year married Hannah Clayton, daughter of the local vicar, when he was aged 49 and she 38.[11] In 1803, James, like his brother William, served a year as High Sheriff of Leicestershire. None of the brothers had any children.[11] So when James died in 1812, his will left the Hall and estate to his wife for her lifetime, and then to his cousin, Ann Hunt. Hannah survived for another 32 years and died in 1844, by which time Ann Hunt had married into the Marston family of Enderby, and had already died. The Belgrave Estate, which had by then become heavily mortgaged, was sold by Ann's heirs in 1845 to a railway entrepreneur called John Ellis.[11]

John Ellis and his daughters 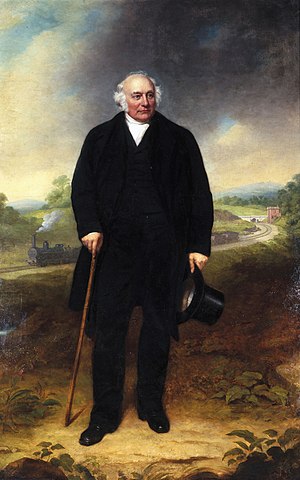 John Ellis took possession of Belgrave Hall in 1847, when he was 58, with a wife and seven daughters.[12] By the time he moved from Beaumont Leys to the Hall, he was one of Leicester's most prominent figures. In 1828 he had met George Stephenson, who having completed the Stockton and Darlington Railway was working on the Liverpool and Manchester Railway. Ellis was a key figure in getting the Stephensons to take on the building of a line from Leicester to the Swannington coalfields, which was completed in 1833.[13] He was a Quaker and reformer, and in 1836 Ellis had become a Town Councillor. In 1840 he had attended the World's Anti-Slavery Convention.[14] By 1845 as a director of the Midland Railway, he had overseen the merger with the Birmingham and Gloucester Railway. Having moved to his elegant 140-year-old house, he continued both his railway and public life roles. In 1849 he became chairman of the Midland Railway, and represented Leicester in Parliament between 1848 and 1852. John Ellis died in 1862, and his wife and five of his daughters stayed on at Belgrave Hall.[7]

The 'Belgrave sisters' played a leading role in various Leicester institutions, and hosted literary and social events at the Hall. They supported the suffragette movement, and Charlotte Ellis was on the 'Leicester Board of Guardians' for nine years,[7] administering the town's poor law relief from 1892, alongside two other pioneer women guardians, Fanny Fullagar and Mary Royce.[15] The sisters valued the gardens and grounds. Recalling there arrival, Gertrude wrote, 'The east side of the house was festooned by an enormous vine, and a few weeks later the flowers that haunt old gardens began to appear. Some of these may have been blooming for a hundred years and still as each spring returns, renew their life! The daffodils amongst the paddock grass, the lungwort, the peonies, and the great orange lilies…' .[16] In 1889 they bought the meadowland that had gone with Belgrave House, re-establishing the parkland beside the river, and established a woodland garden.[16] A cousin recalled how, when visiting the sisters, they would seek out "..the boat house down by the river. Here one might be thrilled by discovering a tiny room with fireplace all complete, used by the literary sister as a study." [16] Towards the end of her life, Gertrude wrote, "For more than sixty years the Belgrave garden gave a very special kind of pleasure to all those connected with the Belgrave home, and the memory of it is still fair and fragrant." [16] At Margaret's funeral in 1923, the sisters were described as, "public spirited citizens, beloved and looked up to in Belgrave and Leicester. Their home was one of culture and refinement. Their outlook on the world was wide" .[17] Margaret, the last of the daughters, died in 1923, 76 years after they arrived.[12]

After Margaret's death, the Hall was sold to Thomas Morley, a Leicester hosiery manufacturer, and in 1936 it was sold for £10,500 to the Corporation of Leicester, who opened it as a museum and public gardens.[7]

The museum was furnished to present a moderately well-to-do eighteenth and early-nineteenth century household.[4] The furniture came from a wide variety of sources, some of it, such as the lion-mask chairs and settee in the Drawing Room, from much grander settings than this.[18] A refit in 2005 added more details about the servants quarters and shows the contrasting lifestyles of an upper-middle-class family and domestic servants in Victorian society.[19]

On the opposite side of the road is the parkland running down to the river. This was at various times the gardens for Belgrave Hall and Belgrave House, but is now known as Belgrave Gardens, and is open to the public. Two acres of gardens at the back of the Hall are open at the same times as the museum. These retain features first laid out by John Ellis in 1850, with formal garden features, walled kitchen gardens and glass houses.[19] Former outbuildings have been converted to a small 'craft village'of six workshop units.[20] The formal gardens now also contain statues and monuments from 'lost' Leicestershire Gardens, such as the memorial to Edward Holdsworth from Gopsall Hall.[16]

Four statues remain from an original collection of 16 that were bought by the Vanns some time before 1790. These appear to have been a diverse collection of mythological subjects bought in Italy by Colonel Hewitt of Stretton Hall, and bought from his estate by the Vanns. They were described by John Throsby in his 'Leicestershire Views' as being "Pomona; Diana; Flora; Ceres; Hercules; Venus; a Satyr; a Turk and his consort; two Emperors and a Pope".[21] Hannah Vann's will, at her death in 1842, notes the statues as items she hoped could stay in the family. Twelve appear to have been taken to Enderby by her heirs, where they were locally known as the 'Twelve Apostles', but have since been dispersed and mostly not been traced.[22] Of the four that remain, perhaps because they were larger and less easily moved, two are in the formal gardens, and may be Throsby's 'Ceres' and 'Hercules'.[23] The other two stand inside what were once the gates to Belgrave House, now part of Belgrave Gardens, and are both statues of the Greek god Telamon, but may be what Throsby describes as the two Emperors.[23]