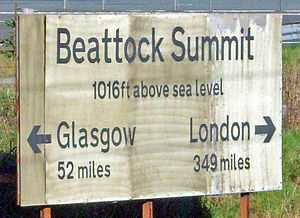 Sign marking the summit, as seen from the West Coast Main Line 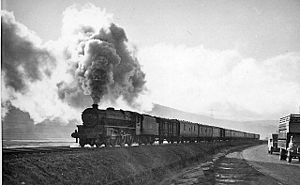 Nearing Beattock Summit from the north in 1957 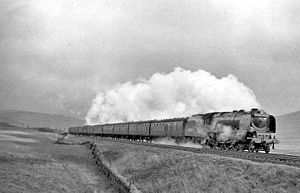 The Beattock Summit is a high point of the West Coast Main Line (WCML) railway and of the A74(M) motorway as they cross from Dumfriesshire to Lanarkshire.

The highest point on the WCML north of the border (built by the Caledonian Railway and opened on 15 February 1848), it is located 52 miles south of Glasgow Central and 349 miles north of London Euston stations. The height of the summit is 1,033 feet above sea level. The signboard by the rail track records the elevation as 1,016 feet.

Steam locomotives frequently required banking assistance in getting their heavy trains up the incline, particularly in the northbound direction, which had steeper gradients. There was an engine shed at Beattock which had banking locomotives on standby twenty-four hours per day to minimise train delays.

The severity of the climb to the summit is referenced in W. H. Auden's poem Night Mail, written in 1936 for the G.P.O. Film Unit's celebrated production of the same name.

Electric locomotives, as far back as the Class 86, as well as today's Inter-city services, climb the gradient without assistance.