Beadnell is a village on the coast of Northumberland, a little south of Seahouses, and about four miles south-east of Bamburgh. It sits on the North Sea coast, and has a population of 528, though the village is growing as a base for tourism, and holiday homes.

The village has the only west-facing harbour entrance on the east coast south of the Tweed. The town consists largely of holiday homes, with some small-scale fishing. Two large caravan sites neighbour the village, as well as a handful of campsites. The old village, such as it is, hides away from the main coast road. 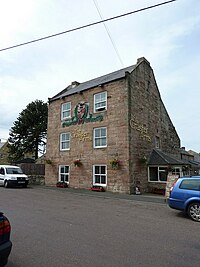 The parish church is the Church of St Ebba (named after St Æbbe of Coldingham, or Æbbe the Elder, founder of abbeys and daughter of King Æthelfrith. It was built in the eighteenth century as a chapel and rebuilt in 1860.[1] A sixteenth-century pele tower remains as part of the public house, The Craster Arms.[1]

Near the harbour are historic limekilns dating from 1747, which were later used for curing herring.[1] They are now owned by the National Trust.

Beadnell is within the North Northumberland Heritage Coast and the Northumberland Coast Area of Outstanding Natural Beauty. Beadnell Bay, a sandy beach stretching two miles to the south, contains a nationally-important colony of little tern and the largest mainland colony of Arctic tern in the United Kingdom. The beach was awarded the Blue Flag rural beach award in 2005.

In the summer months, the village generally attracts holiday makers and people from the caravan site which shuts down at the end of October.

There was a horse race meeting held at Beadnell in the 18th century but by 1840 it had moved to nearby Belford. [2]

The site of an ancient chapel at Ebb's Nook, Beadnell

In 1902, a clock was installed at St Ebba's church to mark the coronation of Edward VII. [3]