Battle is a small town in Sussex, 21 miles east of the county town, Lewes, and 5 miles inland from Hastings. Bexhill-on-Sea is to the south. Battle is situated in the heart of the Sussex Weald in the designated High Weald Area of Outstanding Natural Beauty.

Battle is the site of the Battle of Hastings, where William the Bastard, Duke of Normandy, defeated King Harold II to become King William I in 1066. 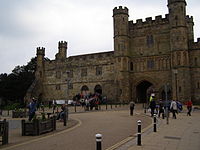 Battle Abbey was founded to commemorate the battle, and dedicated in 1095. The high altar of the Abbey church was reputedly on the spot where Harold died.

The Abbey was dissolved at the Reformation. The Abbey gateway is still the dominant feature of the south end of the main street, although little remains of the rest of the Abbey buildings. The remaining cloisters, part of the west range, were leased to Battle Abbey School shortly after First World War, and the school remains in occupancy to this day.

The abbey at Battle has been known for centuries as Battle Abbey. It and the abbey church were initially dedicated to Saint Martin, sometimes known as "the Apostle of the Gauls", and named in his honour.

A modern shopping development, designed to blend in

The town of Battle was gradually built around the Abbey, and later developed a reputation for the quality of the gunpowder produced in the area. In the mid 18th century, the town supported five watchmakers in the High Street. Today, Battle is known as a tourist destination.

The local bonfire society, Battel Bonfire Boyes, is claimed to be the oldest of the Sussex Bonfire Societies.[1] The importance of Bonfire Night in Battle is that it is located in the wooded Weald of Sussex. Most of the area was heavily wooded, which provided oak and other timbers for Navy Shipyards, power for making cannons (shipped to Portsmouth or Chatham), cannonballs and gunpowder.

Battle was a refuge in First World War, and tunnels still exist, leading from various fields and cellars to Battle Abbey itself. However, they are deemed unsafe and are now closed.

The first gunpowder mill in Battle was built in 1676 when John Hammond was granted permission to build a mill on land owned by the Abbey. A gunpowder works was located in Powdermill Lane - the remains of which have been converted into a hotel. In 1722 Daniel Defoe described the town as being "remarkable for little now, but for making the finest gun-powder, and the best perhaps in Europe".[2] The Duke of Cleveland refused to renew the licence in 1847 after many mishaps,[3] including one occasion in 1798 on which more than 15 tons of gunpowder were left in the oven for too long and exploded. 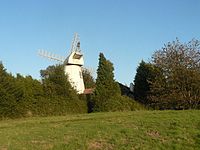 Telham Hill is about a mile southeast of Senlac Hill, in Sussex. It was from Telham Hill that William the Conqueror's army first caught sight of the English army forming up on Senlac Hill, for the Battle of Hastings, 14 October 1066.

There are three Sites of Special Scientific Interest within the parish.

Blackhorse Quarry, a site of palaeontological interest which has produced many fossil bones and teeth including Iguanodon and crocodiles.[4]

Darwell Wood is partially within the parish which is another site of biological importance as an example of hornbeam coppice with oak standards.[6]

Battle is a turning point of British history, where one civilisation ended and a new order began. The battle and the result have been the subject of endless books, tales and dramatic productions.

Apart from the Battle of Hastings and echoes of it in literature, the town has appeared in Anthony Burgess' novel "Earthly Powers"; Battle is the home town of its main character, Kenneth Toomey.