Batcombe is a small, straggling village in the midst of Dorset, standing about twelve miles north-west of the county town, Dorchester, below the northern scarp slope of the Dorset Downs.

The name 'Batcombe' is believed to derive from the Old English Batan cumb, meaning “Bata’s Valley”, after an otherwise unknown landowner. In 1201 the place is recorded as Batecumbe.[1]

A 38-acre filed on Hillfield Hill has been enrolled as a Queen Elizabeth II Field.

The church of St Mary Magdalene is on an ancient site. There has probably been a church there from the 11th century. The current building comprises a chancel, nave and 15th-century tower. The interior contains a font that has a Norman column (made from Ham Hill stone) with a cube-shaped limestone basin (probably made from Portesham stone); the basin is probably older than the column. The church interior also contains an elaborate stone screen, which is also made from Ham Hill stone.[2] 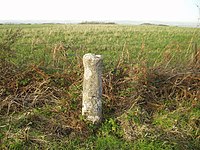 The "Cross in Hand" on Batcombe Down

Above the village rises Batcombe Down and, further east, Gore Hill, near the top of which is a small stone pillar known as the Cross-in-Hand (or Cross and Hand).[3] The pillar, today a Grade II listed structure and a Scheduled Ancient Monument,[4] is a little over three feet in height and may date from before the Norman Conquest, as do other shafts such as the Pillar of Eliseg.[5] At one time there may have been a hand carved on one face, but nothing is visible today,[5] though the pillar has acquired stories about images of a ghostly hand being seen grasping a bowl at its top.[6]

Thomas Hardy used the pillar in his novel Tess of the D'Urbervilles, in a scene in which Alec d'Urberville instructs Tess to "put your hand upon that stone hand, and swear that you will never tempt me—by your charms or ways."[3] The pillar also features in Hardy's poem "The Lost Pyx".[3] 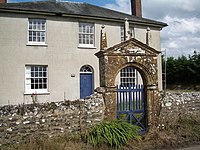 The Minterne family for centuries provided the Lords of the Manor, and the farmhouse of Newlands Farm was the manor house between the 16th and 18th centuries.[7]

The front roadside wall of the farmhouse has an ashlar hamstone archway dating from 1622.

The parish church is the subject of one of Dorset's more curious tales, concerning the local squire, who was known as 'Conjuring Minterne'.

The tale tells that the squire dabbled in magic and was regarded with a great deal of fear and superstition locally. After setting off to ride over steep Batcombe Hill one day, he suddenly remembered he had left his magic book open on the table, where his servants might find it. To save going back by the road, he turned his horse round and spurred it to attempt a massive leap over the parish church, knocking off the pinnacle as he soared clear over the tower. The fearful villagers were afraid that they might offend the Devil by repairing the damage, so for a hundred years they left it alone. When it was repaired, they repaired it at a crooked angle.[8]