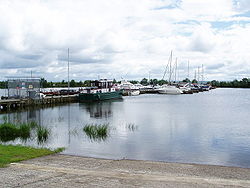 The local marina and harbour, on the shores of Lough Neagh

Ballyronan is a village and townland in County Londonderry, on the north western shore of Lough Neagh. The village is five miles from Magherafelt and 12 miles from Cookstown.

The village was founded by Daniel Gaussen in 1788. He built a forge on the shore of Lough Neagh for manufacturing spades and soon afterwards erected stores. This led to the building of quays and the formation of a port, which greatly benefited the surrounding countryside. A large distillery was erected in 1824, and a brewery in 1830, by Messrs. Gaussen and Sons. Vessels of about 50 tons burden plied regularly between the village and Belfast, exporting wheat, fruit, spirits, ale, and freestone, and bringing back barley, timber, slate, iron, wine and groceries.[1]

The village was well situated for trade as besides being on Lough Neagh, several roads diverge from it. The village was situated on the estate of the Salters Company of London. Near it are the ruins of Salterstown Castle.

During the Irish War of Independence (1919–1922) an RIC sergeant, Frederick Frizelle and two Special Constables, Edward Hegarty and Thomas Hunter were returning from patrol when they were ambushed and all three killed. Three Catholics were killed in reprisals in neighbouring villages. Two of those killed were John Carolan and his nephew, Michael Kilmartin. Within a week of these killings three young Catholic brothers were killed in Desertmartin, County Londonderry and a number of Catholic houses burned after an attack by loyalists.

More recently, Eugene Martin, a Catholic civilian was murdered by the Ulster Volunteer Force on 2 February 1993.

Winston Finlay, a Protestant, shot in front of his wife, by the IRA, as he arrived at his home in Ballyronan. The gunmen opened fire as he got out of the car to open the garage door to allow his wife to drive in. He had previously been a full-time UDR soldier serving in the Intelligence Cell in Magherafelt, County Londonderry and had also served in the RAF for 14 years. He was a member of the Ballyronan Orange Lodge and was a serving member of the RUCR when he was murdered.[2]

The village is a cluster settlement, built around the junction of four roads which pass through the village. These roads go to Coagh, The Loup, Magherafelt and Toome.

The small village centre plays host to a range of facilities including a local mini-supermarket, chip shop and an array of pubs and two wine sellers. The business units located at the Quay also facilitate a beauty parlor, architects and development association for Lough Neagh.

Just located off the main street on the shore lies the Marina Complex, which plays host to the local community centre, bar, boat berthing yard, boat slipways and a harbour with 72 berths, a play park, and picnic areas, caravan/camping site and small forest.

Arthur David Ash Gaussen was the first and so far only internationally capped person from the village. Playing for Moyola Park on the grounds of Lord Spencer Chichester's estate in Castledawson when first called into the Irish squad. Lord Chichester was the inaugural president of the Irish FA, and Moyola Park the first ever winners of the Irish Cup. Arthur Gaussen won his first two caps while with Moyola Park, and the remaining four later in the decade while playing for Magharafelt F.C. Gaussen would later become a Justice of the Peace and Lord Lieutenant of County Londonderry. Gaussen Villas in Ballyronan is named in recognition to his family. Representative Honours: Ireland: 6 Full Caps (1884–1889).

Gaelic Football is a popular sport in the area, with The Loup being the local Gaelic Athletic Association club. Ballyronan has remained void of any Gaelic football team but for those who were born and reared in the village they usually choose to play for the Loup Gaelic Football team.

As the village is situated at the Northern tip of Lough Neagh, this provides the perfect base to host watersports events and since 2001 the village has hosted the Lough Neagh Triathlon each summer. The event has also doubled as the Irish Triathlon Championships.[3] Fishing and sailing are also popular in and around Ballyronan.