Ballyjamesduff is a small town in County Cavan, and a former market town, at a gathering of routes, on the R194 regional road (which here is Granard Road). The town is a mile or so from the main N3 road running from Dublin north-west to Donegal.

The little town centre of Ballyjamesduff is around the triangle of Market Street, Dublin Street and Anne Street.

The Cavan County Museum is found in the town.

John Wesley, the preacher, theologian and founder of the worldwide Methodist Church, preached in Ballyjamesduff and built a church here during the 18th century.

The town has largely stayed out of the history books. Its quietness was shaken though in August 2016 by a gruesome family murder-suicide which slew a whole family of five.[2][3] 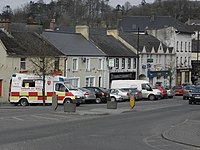 The show uses special sound recording equipment to measure crowd cheering levels during the entire run of the Frolics. The act that receives the highest cheer wins the "Silver Spuckle Award", an award named after Monsignor Sylvester Spuckle, who was a patron of the show, and a cash award of €1,000.

The Pork Festival was an annual town festival started in 1994.[8] It celebrates all things pig-like. This is largely due to a nearby pork-rendering factory regularly supplying a large amount of pork for use in the town festival. The festival is one which celebrates the commercial value of the pig to the town.

Highlights of the festival included: 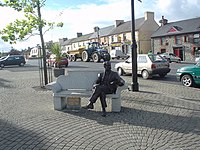 Bronze figure of Percy French in the town square

Percy French, a poet and songwriter, lived in Ballyjamesduff.

The Percy French song "Come back Paddy Reilly to Ballyjamesduff", which was written about a man from the area who acted as Jarvy (coach driver) for French and decided to move away to Scotland. It is said that he drove his horse and cart to Carrick-on-Shannon, parked the horse and cart outside the railway station and took the train to Dublin. Legend has it that the horse ran all across Ireland looking for Paddy, until Paddy Reilly was said to have returned. Paddy Reilly is now supposedly buried in St Joseph's graveyard, in Ballyjamesduff.