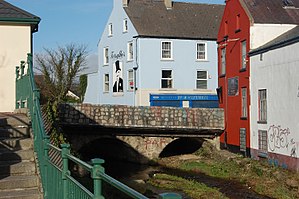 The bridge on the river at Kilkeel

The Aughrim River or Little Kilkeel River flows through southern County Down to Kilkeel Harbour.

The river rises near Attical, at the southern edge of the Mourne Mountains, and flows to the east of Aughrim Hill and down to the fishing port of Kilkeel.

In Kilkeel the river is known as the 'Little Kilkeel River', a name proclaimed on a bridge over the river in the town centre. The river enters Kilkeel Harbour, formed of the little estuary of the Kilkeel River.