Ardmair is a village in Cromartyshire, in the county's western part. The village is at the edge of Coigach and 3 miles north of Ullapool, along the A835 road.

This is a fishing village primarily, but also a popular holiday resort, with a caravan site and a number of holiday homes. During the holidays, visitors can hire a boat from the beach at Ardmair, including canoe boats.[1]

The peak of Ben Mor Coigach is to the north, and is sometimes climbed by visitors staying in Ardmair.[2]

Ardmair lies on the shores of Loch Kanaird. The River Kanaird flows into Loch Kanaird to the north of Ardmair Point; it rises in the hills to the north-east of Ullapool.

On the right hand side of Ardmair Bay is Isle Martin, less than a mile from Ardmair Point at its nearest point. This island is managed as a nature reserve, and was owned by the RSPB until 1999. On 3 May 1999 ownership of the island passed to a charitable trust formed by the local community, who agreed to assume responsibility for the island. A passenger ferry running from Ardmair to Isle Martin operates during the summer. 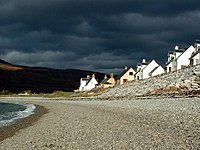